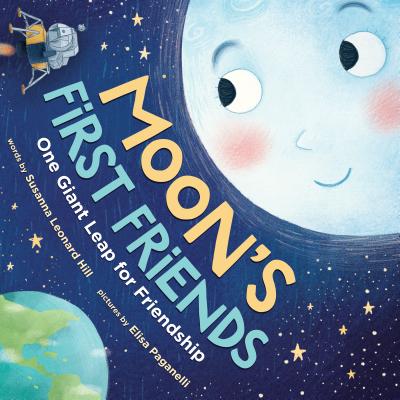 A New York Times and Wall Street Journal bestseller! Delight in this heartwarming picture book about a moon who just wants a friend...

Commemorate the extraordinary 50th anniversary of the Apollo 11 mission and learn about the spaceflight that first landed humans on the moon through this sweet story about friendship! From high up in the sky, the Moon has spent her whole life watching Earth and hoping for someone to visit. Dinosaurs roam, pyramids are built, and boats are made, but still no one comes. The Moon can't help but wonder…will friends ever come visit her? Until one day a spaceship soars from Earth...and so does her heart. Filled with beautiful illustrations and charming text, this moon book for kids ages 4-7 and bedtime read aloud is a must-have for parents and teachers alike searching for new solar system books and astronaut books for toddlers and children.

Susanna Leonard Hill is the New York Times bestselling author of Moon’s First Friends, as well as many other award-winning books for children. She does frequent school and library visits, teaches picture book writing, and offers picture book critiques. She lives in New York's Mid-Hudson Valley with her children and two rescue dogs.

Elisa Paganelli attended the Art Institute in Modena and the illustration course at IED European Institute of Design in Turin, Italy, and has worked as a creative designer since she was a young student. Over the years, she has run a design shop and studio, received awards as a young female entrepreneur, and today works as an illustrator full time from her office accompanied by her dogs and cats.

"This cheerful title introduces a rosy-cheeked, eye-lashed ‘Queen of the Night Sky,’ lonely after 4.5 billion years of silvery bright solitude. Elisa Paganelli’s textured digital artwork extends the winsome story with a cozy version of space, a soothing, star-speckled blue rather than bottomless black, and watched over by the eager, anthropomorphized "queen," who cheers as the Eagle lands right between her eyes." — The New York Times

"This is a story for young readers. It anthropomorphizes the moon, making her a character in the tale of the lunar landing. It's remarkably sweet, and kids ages 2 to 5 will love it." — Romper

"Set apart by its unusual point of view... Appended notes on the moon, NASA, spacesuits, and the Saturn V rocket also help to give the historic mission some background." — Kirkus Reviews

"In this playful book, the anthropomorphized moon watches humans from afar and eagerly notes as they invent the first airplane, build rockets and prepare to take the first tentative steps on her surface. Through text and informative back matter, young readers learn fascinating facts about the moon, astronauts and the space program." — Washington Parent

"For the littlest sky-watcher "The Moon’s First Friends" by Susanna Leonard Hill, illustrated by Elisa Paganelli, gives the orb a certain friendliness. Through the centuries, as this tale goes, the moon observed everything that happened on Earth, occasionally razzle-dazzling humans until finally, she had visitors! This is a cute story and, for curious 3-to-5-year-olds, there’s a nice afterword you can read, too." — Bookworm Sez

"A cute story [that] manages to deliver some facts (including how solar eclipses work!) seamlessly within the narrative." — Panetary.org

"In Paganelli’s friendly illustrations, the moon is an anthropomorphic, bright-eyed blue sphere with rosy cheeks who communicates with the changing world throughout history." — Publishers Weekly