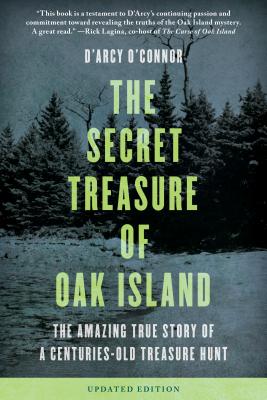 
Not On Our Shelves—Ships in 1-5 Days
It started on a summer afternoon in 1795 when a young man named Daniel McGinnis found what appeared to be an old site on an island off the Acadian coast, a coastline fabled for the skullduggery of pirates. The notorious Captain Kidd was rumored to have left part of his treasure somewhere along here, and as McGinnis and two friends started to dig, they found what turned out to be an elaborately engineered shaft constructed of oak logs, nonindigenous coconut mats, and landfill that came to be known as the Money Pit. Ever since that summer day in 1795, the possibility of what might be hidden in the depths of a small island off the south coast of Nova Scotia, Canada, has made it the site of the world's longest, most expensive, and most perplexing treasure hunt. Author D'Arcy O'Connor recounts the fascinating stories and amazing discoveries of past and current treasure seekers who have sought Oak Island's fabled treasure for over two hundred years. It has baffled scientists and madmen, scholars and idiots, millionaires and get-rich-quick schemers, psychics, engineers, charlatans, and even a former president of the United States. The island has consumed the fortunes-and in some cases, the lives-of those who have obsessively set out to unlock its secret. Despite all their efforts, the mystery remains unsolved, and not a single dime of treasure has ever been recovered. The present-day search is an archaeological dig exceeding anything ever done anywhere for similar purposes, and it may well result in the discovery of one of the world's richest and most historically significant treasures. But this is also the story of individuals who have dedicated years of their lives to discover what was buried long ago beneath this strange island. They are driven by a lust for gold, by archaeological curiosity, and by their determination to outwit the engineer who was responsible for the Oak Island enigma.
D'Arcy O'Connor, a former feature writer for The Wall Street Journal, is a round-the-world sailor, and a continuing freelancer and documentary film-maker. Apart from the Journal, he has contributed to publications such as People, National Geographic, and Yachting magazines. He now lives in Montreal.