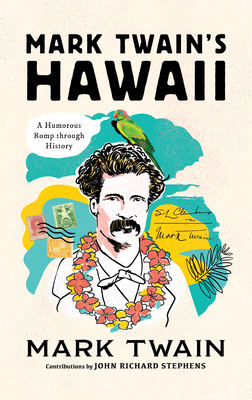 
Not On Our Shelves—Ships in 1-5 Days
Mark Twain's wit and wisdom is timeless. Mark Twain's Hawaii: A Humorous Romp through History, combines Twain's own writings on Hawaii with personal reminiscences by others who met him at that time, and traces Twain's journey through the region just as he experienced it in 1866. The book highlights Twain's humor, travel in the 19th century, history, social commentary, and the exotic locale in an authoritative and entertaining volume for Twain fans and Hawaii enthusiasts.
John Richard Stephens, a resident of Hawaii, is the author/editor of 23 books, including Wyatt Earp Speaks, Gold, Commanding the Storm, and The Wildest Lives of the Wild West. John's books have been selections of the Preferred Choice Book Club, the Quality Paperback Book Club, the Book of the Month Club, and a selection of the Civil War Trust. His work has been published as far away as India and Singapore and has been translated into Japanese and Finnish. John also has the distinguished honor of being quoted around the world in lists of quotations and in several books next to such luminaries as Abraham Lincoln, Mark Twain, Lord Byron and Franz Kafka.