Leonard, Marianne, and Me: Magical Summers on Hydra (Hardcover) 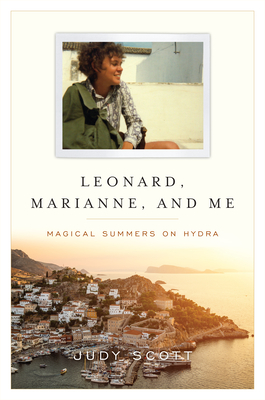 Leonard, Marianne, and Me: Magical Summers on Hydra (Hardcover)


Special Order—Subject to Availability
Leonard, Marianne, and Me chronicles forty years of Judy Scott's frequent summers on the Greek island of Hydra with a diverse artistic community and her friendship with singer-songwriter and poet Leonard Cohen and his legendary muse Marianne Ihlen. This memoir, based on Scott's notebooks and journals, includes incidents in their lives and their relationship to one another--at a point when it was changing forever--that have never been discussed before. As Cohen himself observed of this book when Scott sent the manuscript to him for his approval: "I particularly admire the detail and honesty of the piece." One of the more unique features in this recounting is the emerging acknowledgment the author confronts of her own sexuality, as she writes: "It did not take long for Leonard to recognize that I was more attracted to Marianne than I was to him, though I came to love him too in the end." The book also describes Hydra in the early 1970s in great detail--a unique place filled with astonishing physical beauty and an incomparable atmosphere of serenity and peaceful energy. The island contained a small foreign community of like-minded creative souls, artists, musicians, writers, and their supporters and admirers. As Scott explains, "Hydra in the late '60s and early '70s was at its creative zenith. Like Paris in the '30s, Harlem in the '40s, Greenwich Village in the '50s, San Francisco in the '60s--Hydra in the '70s was the place to be." The memoir, though it centers on Scott's most important, most impactful interactions with Leonard and Marianne, also contains several portraits of other Hydra habitu's, all members of the same small ex-pat community, all close friends (and occasional lovers) of Leonard and Marianne, all uniquely interesting in their own right. Leonard, Marianne and Me is a story of a special time, place, and cast of characters--a travelogue of an enchanted island as it was back then and still is to this day, backlit by the glow of Leonard Cohen and his muse, Marianne.
Judy Scott, originally born and raised in New Jersey, now lives in Los Angeles with her spouse, Monika. Scott worked for many years at the highest levels of the independent film production and distribution business while raising her daughter, Torie. The projects she was associated with garnered numerous awards, and in 2005 Scott helped launch the first-ever LGBT cable TV network as a senior acquisitions and business affairs executive. She returns to Hydra often.