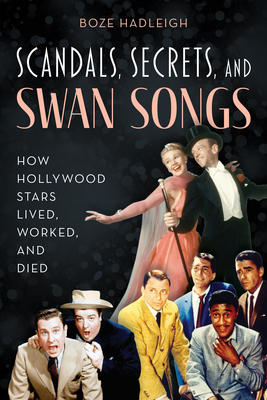 
Not On Our Shelves—Ships in 1-5 Days
Behind the images and facades of stars whose fame and fascination continue to outlive them lies the naked truth. How Hollywood stars lived, worked and died is often more dramatic than their films. When we talk about movie stars we usually dwell not on their movies but their personalities or what happened to them or supposedly happened. Their lives interest us even more than their roles, especially, let's be honest, their mishaps and tragedies, including early deaths. Their scandals define several movie stars, and Hollywood secrets remain a true-gossip staple, particularly sexual secrets. Scandals, Secrets & Swansongs takes a close-up, no-holds-barred look at 101 stars-at their surprising, often shocking, sometimes sordid but always entertaining real selves and lives.
Labeled as a pop culture phenomenon by the LosAngeles Times, Boze Hadleigh is the author of Broadway Babylon, Celebrity Diss and Tell, An Actor Succeeds and Marilyn: Lost Images. He holds a master's in journalism and has published articles in over 100 periodicals here and abroad. He speaks five languages, has visited more than 60 countries and won on Jeopardy! He lives in Beverly Hills, California.