Highest and Hardest: A Mountain Climber's Lifetime Odyssey to the Top of the World (Hardcover) 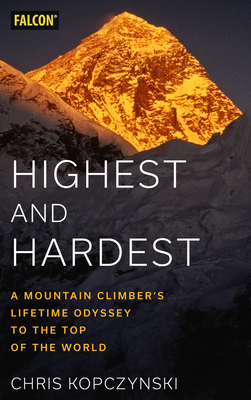 Highest and Hardest: A Mountain Climber's Lifetime Odyssey to the Top of the World (Hardcover)


Not On Our Shelves—Ships in 1-5 Days
At age 16 Chris Kopczynski carved the words "Everest/Eiger" into the handle of his ice axe, marking his goal to climb the two mountains known as the "highest and the hardest." He accomplished that goal by the age of 33, becoming the ninth American to summit Everest and the first American to summit both the North Face of the Eiger and Mt. Everest. With the climbing addiction in his blood, he set new goals and became the twelfth in the world to climb the highest peaks on seven continents. Chris' lifelong odyssey to the top of the world includes the climbs, attempts and summits of every continent's highest, hardest, and most significant mountains. He gives readers stories of perseverance and survival as he achieved his dreams on Robson in the Canadian Rockies, Chimney Rock in Idaho, the Pamirs and Elbrus in the USSR, Denali in Alaska, Makalu in Nepal, Antarctica's Vinson, Chile's Aconcagua, Kosciuszko in Australia, and Africa's Kilimanjaro.
Chris Kopczynski has climbed with John Roskelley for over 55 years. From their early days bouldering around Spokane, tackling the vertical and technical big walls of the Pacific Northwest to more challenging peaks around the world, they grew to become all-around mountaineers. Roskelley calls Chris the most underrated American mountaineer. With the publication of Chris's life story, the climbing world can recognize and applaud the accomplishments of this premier world climber.