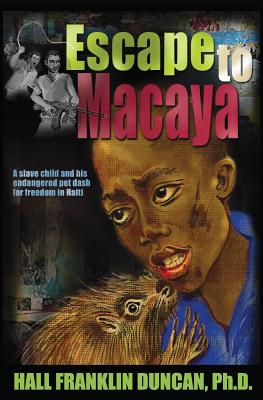 
Not On Our Shelves—Ships in 1-5 Days
(This book cannot be returned.)
Fourteen-year old Andre, kidnapped into slavery, makes a desperate escape from certain death This action-packed story is about a teenager's horrific experiences as a child-slave in Port au Prince. He is imprisioned in a daily hell of hopelessness. Starvation, painful beatings, little sleep and no school become his daily existence. A rare mountain creature, a hutia, adds to the suspense as the story unfolds in each chapter. The surprise ending gives hope and courage to the reader to eliminate child slavery wherever it exists. This unique book educates the reader with illustrated sidebars that feature facts about Haiti, its people and their culture. Resources for further study and suggestions on how to help make a difference for the people of Haiti are included in this book.
Hall has been cartooning since the age of six when he painted an airplane on the back of a classmate's white shirt. His friend wanted to fly...and did...with him to the cloak room for a sound spanking. Duncan's cartoons have appeared in local, national and overseas publications. His work has taken him to 28 countries. In 1974 he received the Whitney M. Young Human Relations Award for his interracial cartoon strip, Winner Williams. Hall's doctorate is in cross-cultural communication from the University of the Witwatersrand, South Africa, where he researched the pictorial perception of South African children, including Zulu and Tsonga tribes, in order to become a more effective illustrator. His research has been published by the University of Cambridge, England, New Readers Press, Syracuse, New York, and The Human Sciences Research Council of South Africa. Upon his return from Africa, he taught cartooning and advertising for seventeen years at Central State University in Oklahoma, now the University of Central Oklahoma. As director of International Services for the International Center for Humor and Health in Edmond, Oklahoma, he presented workshops on humor and health in South Africa, South America, Europe, Asia and the United States. He specializes in humor and health training for senior citizens. This is Dr. Duncan's first novel for juveniles. This book is based upon his observation of child slavery in several countries. Hall has four sons, many grandchildren and great-grandchildren, all of whom keep him well-supplied with laughter and cartoon material. Hall's wife, Lois Smith-Duncan, died in 2011. She played the role of Nurse Ease-A-Pain in Dr. Duncan's hospital and retirement home programs. Dr. Duncan now resides in his studio cottage in Edmond, Oklahoma, U.S.A. Aside from his leadership seminars and writing children's books, his hobbies are ballroom dancing and exploring world history.