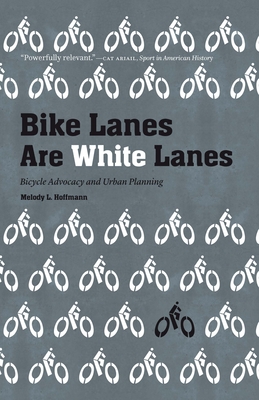 In Bike Lanes Are White Lanes scholar Melody L. Hoffmann argues that the bicycle has varied cultural meaning as a “rolling signifier.” That is, the bicycle’s meaning changes in different spaces, with different people, and in different cultures. The rolling signification of the bicycle contributes to building community, influences gentrifying urban planning, and upholds systemic race and class barriers.

In this study of three prominent U.S. cities—Milwaukee, Portland, and Minneapolis—Hoffmann examines how the burgeoning popularity of urban bicycling is trailed by systemic issues of racism, classism, and displacement. From a pro-cycling perspective, Bike Lanes Are White Lanes highlights many problematic aspects of urban bicycling culture and its advocacy as well as positive examples of people trying earnestly to bring their community together through bicycling.

Melody L. Hoffmann is an instructor of mass communication at Anoka-Ramsey Community College. Her work has been anthologized in Culture on Two Wheels: The Bicycle in Literature and Film (Nebraska, 2016).

"Environmental historians interested in urban issues will profit from Hoffmann's look at social justice issues associated with "green" development. For urban planning students, as well as anyone involved in city planning, this book could be considered required reading. Bicycle advocates will find the work provocative and a stimulus toward more inclusive efforts in creating better transportation options for all city residents. Hoffmann has written an important and significant contribution to scholarship and to public discussions about bicycles, urban living, and development."—James A. Pritchard, Environmental History

“For anyone interested in the urban role of cycling, this is an important book. Informed by an overdue concern with race, class, and gender, it critically redresses imbalances in our current understandings of cycling. [Hoffmann] usefully punctures a general liberal, middle-class complacency over the implicitly assumed superiority of the bicycle. . . . Indispensable reading if our goal is to broaden cycling’s appeal and to make inclusive and just cities, as well as genuinely ecologically sustainable ones.”—Dave Horton, author of Promoting Walking and Cycling: New Perspectives on Sustainable Travel