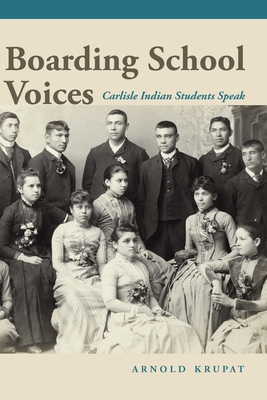 
Not On Our Shelves—Ships in 1-5 Days
Boarding School Voices is both an anthology of mostly unpublished writing by former students of the Carlisle Indian Industrial School and a study of that writing. The boarding schools’ ethnocidal practices have become a metaphor for the worst evils of colonialism, a specifiable source for the ills that beset Native communities today. But the fuller story is one not only of suffering and pain, loss and abjection, but also of ingenious agency, creative syntheses, and unimagined adaptations.

Although tragic for many students, for others the Carlisle experience led to positive outcomes in their lives. Some published short pieces in the Carlisle newspapers and others sent letters and photos to the school over the years. Arnold Krupat transcribes selections from the letters of these former students literally and unedited, emphasizing their evocative language and what they tell of themselves and their home communities, and the perspectives they offer on a wider American world. Their sense of themselves and their worldview provide detailed insights into what was abstractly and vaguely referred to as “the Indian question.” These former students were the oxymoron Carlisle superintendent Richard Henry Pratt could not imagine and never comprehended: they were Carlisle Indians.

Arnold Krupat is a professor emeritus of global studies and literature at Sarah Lawrence College. He is the author of numerous books, including All That Remains: Varieties of Indigenous Expression (Nebraska, 2009) and “That the People Might Live”: Loss and Renewal in Native American Elegy. He is the editor of Companion to James Welch’s “The Heartsong of Charging Elk” (Nebraska, 2015).
“Recovering the Native American voices in this book is an important undertaking to understanding Native American intellectualism and activism in the long history between the nineteenth century and today. . . . Boarding School Voices is written in such a readable way that any [person] simply curious about Native American history and literary production may be interested in reading it.”—Lionel Larré, editor of Tales of the Old Indian Territory and Essays on the Indian Condition


“The letters and other student-authored texts this book makes accessible are an untapped resource for scholars and students working to challenge the restrictive assimilationist-resistance binary that has dominated narratives of the boarding school experience.”—Jacqueline Emery, editor of Recovering Native American Writings in the Boarding School Press