Ricoeur and the Third Discourse of the Person: From Philosophy and Neuroscience to Psychiatry and Theology (Studies in the Thought of Paul Ricoeur) (Hardcover) 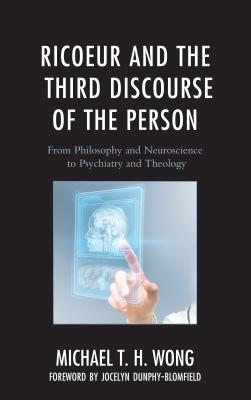 Ricoeur and the Third Discourse of the Person: From Philosophy and Neuroscience to Psychiatry and Theology (Studies in the Thought of Paul Ricoeur) (Hardcover)


Not On Our Shelves—Ships in 1-5 Days
This book is about the so called "4S" challenge - how does or can or should someone say something to someone about something? This challenge is getting more intense day by day in our contemporary globalized world, increasingly connected by science and technology through telecommunication and all sorts of social media, where people are acutely aware of the diverse views on culture, politics, economics, religion, ethics, education, physical health and mental wellbeing, which are very often in conflicts with each other. This book arises from the reading of the dialogue between two internationally renowned and respected French scholars, Jean-Pierre Changeux and Paul Ricoeur, What Makes Us Think? A Neuroscientist and a Philosopher Argue about Ethics, Human Nature, and the Brain, which explores where science and philosophy meet, and whether there is a place for religion in the 21st century. This book develops on the ideas Ricoeur raised in the dialogue about the need for "digging deeper" and a "third discourse" as a way forward to improve dialogues between competing worldviews and ideologies. It attempts to formulate a "third discourse" (as distinct from ordinary language as "first discourse" and various scientific or professional/specialist languages as "second discourse") to address the burning issue of fragmentation of the person through overcoming the alienations between established discourses of philosophy, science and theology, without doing injustice to the unique and indispensable contributions of each of these discourses. It argues that such a "third discourse" has to go beyond dualism and reductionism. To achieve that, this new way of talking about the lived experience of the person is going to take the form of a non-reductive correlative multilayered discourse that has the capacity to, as expressed in the language of the hermeneutics of Ricoeur, "explain more in order to understand better.
Michael T. H. Wong is clinical professor of psychiatry at Li Ka Shing Faculty of Medicine, The University of Hong Kong.