Against Power Inequalities: a history of the progressive struggle: New Edition (Paperback) 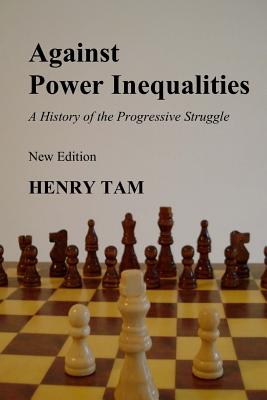 Against Power Inequalities: a history of the progressive struggle: New Edition (Paperback)


Not On Our Shelves—Ships in 1-5 Days
(This book cannot be returned.)
Power inequalities undermine cooperation and erode mutual respect. From the time of ancient tyrannies to the prevailing global plutocracy, the widening gap between the powerful and the rest has fuelled the spread of dogmas, imposed oppressive practices, and denied people a chance to shape the decisions that affect their lives. 'Against Power Inequalities' provides a historical guide to the contest for power redistribution through the centuries, and draws out the underlying obstacles to the development of more inclusive communities. It is a recommended resource by the Equality Trust, and will be of interest to anyone wanting to learn more about the progressive struggle across centuries to reverse the concentration of power in an unaccountable elite. ***** "Henry Tam has written a book that is breathtaking in its panoramic overview of the genealogy of power inequalities and the struggles against them. ... In its forensic, but always optimistic, analysis of how citizens have worked in the past, and continue to work, towards a fairer, more just society, we have an inspirational example of a text that speaks truth to power." - D. Reay, Professor of Education, University of Cambridge "Tam's book is an intellectual tour de force, an erudite romp through the history of civilization that highlights the origins of power and the never-ending effort to democratize hierarchical systems through mobilized participatory communities. It bears reading and re-reading." - C. Derber, Professor of Sociology, Boston College, USA "In this thought-provoking book Henry Tam demonstrates that in times in which populist movements try to pit the people against the bearers of democratic institutions, we need to reconsider the relation between democratic decision-making and community life. ... The] work of a truly independent scholar." - E. M. H. Hirsch Ballin, Professor of Constitutional Law, University of Tilburg, the Netherlands "Tam's book is a kaleidoscope of human history in which he tells a compelling story. He understands the nature of power and the negative impacts it can have in almost any conceivable culture. However he also strikes a positive and optimistic note. ... His fundamental faith in humanity shines through." - R. Spellman, Chief Executive, Workers Educational Association "Henry Tam is a master storyteller. This is history retold as a panorama of struggle, hope and co-operation in the name of fairness and in the pursuit of an ever wider circle of respect and equality." - E. Mayo, Secretary General, Co-operatives UK "Tam takes on a breathtaking sweep of philosophy, history, and world culture. Throughout this book, he tugs with a potent blend of indignation and optimism at a single thread: What happens when people do not have a fair share of power, and how we can counter it by creating a more inclusive society." - D. Dyssegaard Kallick, Senior Fellow, the Fiscal Policy Institute, USA "Henry Tam takes us on an epic journey spanning more than two millennia of human ideas and endeavour, and reminds us that there is nothing inevitable about inequality of power and its attendant misery, and that alternatives based on enlightened enquiry, distributed power, and constant vigilance, are always to be found." - S. Wyler, Director, Development Trusts Association "Henry Tam tells the inspiring, global story of democratic struggles against concentrated power and offers guidance for progressives today. It is a broad, bold, and thoughtful manifesto for popular democratic reform." - P. Levine, Research Director, Jonathan Tisch College of Citizenship and Public Service, Tufts University (USA)