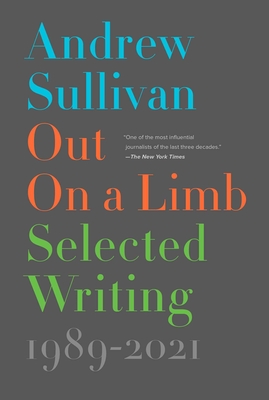 
Not On Our Shelves—Ships in 1-5 Days
Andrew Sullivan, “one of the most influential journalists of the last three decades” (The New York Times) and founding editor of The Daily Dish presents a collection of 60 his most iconic and powerful essays of social and political commentary from The New Republic, The Atlantic, The New York Times Magazine, New York magazine, and more.

Over the course of his career, Andrew Sullivan has never shied away from staking out bold positions on social and political issues. A fiercely independent conservative, in 1989 he wrote the first national cover story in favor of marriage equality, and then an essay, “The Politics of Homosexuality,” in The New Republic in 1993, an article called the most consequential of the decade in the gay rights movement. A pioneer of online journalism, he started blogging in 2000 and helped define the new medium with his blog, The Daily Dish. In 2007, he was one of the first political writers to champion the presidential campaign of Barack Obama, and his cover story for The Atlantic, “Why Obama Matters,” was seen as a milestone in that campaign’s messaging. In the past five years, he has proved a vocal foe both of Donald Trump and of wokeness on the left. Loved and loathed by both left and right, Sullivan is in a tribe of one.

Bold, timely, and thought-provoking, this collection of “trenchant observations from an influential journalist” (Kirkus Reviews) on culture, politics, religion, and philosophy demonstrates why he continues to be ranked among the most intriguing and important public intellectuals in US media.
Andrew Sullivan is one of today’s most provocative social and political commentators. A former editor of The New Republic, he was the founding editor of The Daily Dish, and has been a regular writer for The New York Times Magazine, The Atlantic, Time, Newsweek, New York magazine, The Sunday Times (London), and now The Weekly Dish. He lives in Washington, DC, and Provincetown, Massachusetts.
“[These] essays don’t just communicate his thoughts, they communicate his heart. . . . Even his most passionate arguments are thoughtfully delivered, deeply rooted in his philosophy and faith. . . . When I reached the end of his book, I felt a sense of gratitude. . . . For 32 years a thoughtful man has demonstrated the courage of his convictions and challenged his readers time and again. . . . Read Out on a Limb for the snapshots of recent history. Read it to better understand the many journeys of one of America’s most important public intellectuals. But most of all read this book to see what it looks like when a thoughtful man tries his best to tell the truth and let the chips fall where they may.” —David French, New York Times

“A thrilling intellectual romp through the last 30 years of political and cultural debate . . . [Sullivan] is a writer in the tradition of Samuel Johnson, bringing all available faculties—intellectual, emotional, moral, and spiritual—to bear in his work.” —American Conservative

“Our last remaining major contrarian: a thinker who’s devoted his career to the proposition that even those with whom he agrees can err.” —Stephen L. Carter, Bloomberg

“[Out on a Limb] gathers 60 pieces from the past three decades that serve as both a chronicle of [Sullivan’s] life and a record of significant transformations in American culture. . . . Trenchant observations from an influential journalist.” —Kirkus Reviews

“Fans of Sullivan’s work are sure to enjoy having his intellectual curiosity and impassioned prose collected in one place.” —Publishers Weekly

“One of the most influential journalists of the last three decades.” —Ben Smith, The New York Times

“In my view the best and bravest commentator of our time. Really, the nearest thing to Orwell we have.” —Niall Ferguson

“The most important writer during the Trump era.” —Joe Scarborough

"No writer of comparable gifts [spoke out for same-sex marriage] earlier, pushed harder against what seemed at the time like an unassailable consensus, engaged as many critics (left and right, gay and straight) and addressed himself to as many audiences as Sullivan. No intellectual did as much to weave together the mix of arguments and intuitions that defines today’s emerging consensus on the issue. . . . I hear echoes of arguments that Andrew Sullivan, and often Andrew Sullivan alone, was making thirty years ago in almost every conversation and argument I’ve had about gay marriage in the last ten years. There’s no other issue and no other writer where the connection between things I read as a teenager and lines I hear today is as clear and direct and obvious. And if that isn’t evidence of distinctive, far-reaching influence then I don’t know what is." —Ross Douthat, The New York Times

“Andrew has never been a prophet, so much as a joyous heretic. Andrew taught me that you do not have to pretend to be smarter than you are. . . . When I read Andrew, I generally thought he was dedicated to the work of being honest. I did not think he was always honest. I don’t think anyone can be. But I thought he held ‘honesty’ as a standard—something that can’t be said of the large number of charlatans in this business.” —Ta-Nehisi Coates, Atlantic

“Andrew Sullivan has been more honest and open-minded than just about anybody else on the right.” —David Brooks, The New York Times

“He was without a natural constituency. He has built one by the force of his own personality, his arguments, and his talent. He is a valiant man.” —Matthew Parris, The Times (of London)

“Andrew Sullivan has done for homosexuality what John Stuart Mill did for freedom. . . . Only those familiar with the deep wells of the history of political philosophy . . . will recognize the scale of his achievement.” —Kenneth Minogue, National Review

“Who is the most influential public intellectual of the last twenty years? I'm inclined to pick Andrew Sullivan. He is hardly the only person behind the struggle for gay marriage, but he was one of the first—and the most relentless. And if one had to pick a single individual who embodied, drove, and represented the evolution of media to online forms, Andrew Sullivan would be a good choice. . . . He embodied the classic blogosphere like no other writer, as he fine-tuned and mastered the art of the blog as an ongoing critical—and indeed substantive—dialog with oneself.” —Tyler Cowen, Vox

"One of the great pleasures of this book lies in watching Sullivan's mind at work . . . [his essays] are filled with a passion and heat that most cultural criticism lacks." —Katie Roiphe, The Washington Post

"Sullivan has found meaning in chaos. . . . With its paradoxical sense of beauty amid pain, Love Undetectable has something of the quality of a war memoir."  —Andrew Delbanco, The New York Times Book Review

"On display here are all of the author's many strengths—compelling, poetic prose style, some keen observations on faith. . . . Sullivan offers a moving defense of the open gay male urban sexual culture and his participation in it." —Liz Galst, The Boston Globe