How Schools Work: An Inside Account of Failure and Success from One of the Nation's Longest-Serving Secretaries of Education (Paperback) 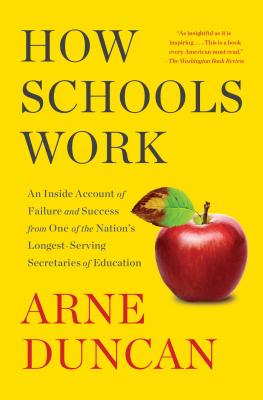 How Schools Work: An Inside Account of Failure and Success from One of the Nation's Longest-Serving Secretaries of Education (Paperback)


In Stock—Click for Locations
“This book merits every American’s serious consideration” (Vice President Joe Biden): from the Secretary of Education under President Obama, an exposé of the status quo that helps maintain a broken system at the expense of our kids’ education, and threatens our nation’s future.

“Education runs on lies. That’s probably not what you’d expect from a former Secretary of Education, but it’s the truth.” So opens Arne Duncan’s How Schools Work, although the title could just as easily be How American Schools Work for Some, Not for Others, and Only Now and Then for Kids.

Drawing on nearly three decades in education—from his mother’s after-school program on Chicago’s South Side to his tenure as Secretary of Education in Washington, DC—How Schools Work follows Arne (as he insists you call him) as he takes on challenges at every turn: gangbangers in Chicago housing projects, parents who call him racist, teachers who insist they can’t help poor kids, unions that refuse to modernize, Tea Partiers who call him an autocrat, affluent white progressive moms who hate yearly tests, and even the NRA, which once labeled Arne the “most extreme anti-gun member of President Obama’s Cabinet.” Going to a child’s funeral every couple of weeks, as he did when he worked in Chicago, will do that to a person.

How Schools Work exposes the lies that have caused American kids to fall behind their international peers, from early childhood all the way to college graduation rates. But it also identifies what really does make a school work.

“As insightful as it is inspiring” (Washington Book Review), How Schools Work will embolden parents, teachers, voters, and even students to demand more of our public schools. If America is going to be great, then we can accept nothing less.
Arne Duncan was one of the longest serving members of President Barack Obama’s cabinet and among the most influential Secretaries of Education in history. He has spent nearly three decades across all levels of education, from his mother’s afterschool program on Chicago’s Southside to CEO of the Chicago Public Schools. He currently sits on the board of Communities in Schools.
“How Schools Work is as insightful as it is inspiring… This is a book every American must read.”
— Washington Book Review

“[Duncan] comes across on every page as smart, honest, decent, articulate, knowledgeable, humble and deeply caring. Who could wish for a better advocate for the children many of our schools are failing every day or for a country whose schools are falling further and further behind those in other industrialized countries?”
— Education Week

“Former Education Secretary Arne Duncan makes a powerful case in his new book, How Schools Work, that major increases in teacher pay, coupled with true accountability and multiple measures for reducing gun violence in schools, stand at the top of any to-do list to improve American education.”
— Brookings

“Arne Duncan was one of the most powerful education secretaries in US history. Which is not to say he got his way. In this surprisingly candid chronology of his lifelong quest to fix America’s schools, Duncan reveals how he learned to run towards angry parents (not away from them), to understand the cowardice of certain national politicians (and the courage of others), and to hear the lies that get told about our education system (including a couple that he told himself).”
— Amanda Ripley, New York Times bestselling author of The Smartest Kids in the World

“In How Schools Work, Secretary Duncan outlines an honest and thoughtful way forward for our education system. This book merits every American’s serious consideration because, as Secretary Duncan explains, our children, our economy, and our national security are at stake.”
— Vice President Joe Biden

“The book exudes an earnest Leave It to Beaver charm.... [Duncan shares] moving accounts of his experiences with the families of students killed by gun violence. He shows admirable verve in describing his success working with a Chicago school system lawyer to find a contractual workaround to make an afterschool program logistically feasible, and his later willingness, as superintendent, to give “Freakonomics” researcher Steven Levitt access to the city’s test data in order to flag teacher cheating.”
— Education Next

“Duncan’s memoir of his experience as U.S. secretary of Education under President Barack Obama draws you in.... Contains valuable insights about the importance of good teachers, effective spending and accountability for results.”
— Washington Times

“A readable recounting of the personal and professional back story that led to Duncan’s priorities as education secretary.... Duncan’s concern for children’s welfare comes through in his writing.”
— The Washington Post

“Duncan is a great writer; How Schools Work moves right along, with a nice mixture of concrete anecdotes, more abstract material about policy struggles, and frank and honest self-evaluations of where he felt he got things wrong versus where he still feels strongly that he understands the way things ought to be.... How Schools Work is certainly worth your time.”
— Journal of a Programmer

“An incendiary new book about the ‘lies’ [Duncan] says the public is fed about education and student potential.”
— Politico

“A stimulating read, this text is recommended for anyone interested in the US education system.”
— Choice