Man vs. Baby: The Chaos and Comedy of Real-Life Parenting (Paperback) 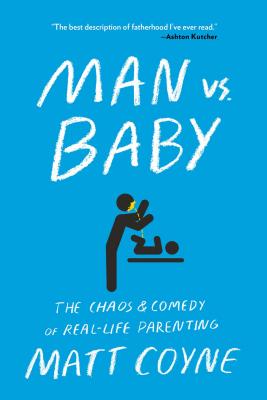 Man vs. Baby: The Chaos and Comedy of Real-Life Parenting (Paperback)


Not On Our Shelves—Ships in 1-5 Days
From a “hero for dads everywhere” (Daily Mirror), a hilarious, insightful, and heartfelt take on parenting based on a viral blog post that Ashton Kutcher called, “one of the best descriptions of fatherhood I’ve ever read.”

One evening, while his three-month-old son Charlie briefly slept, Matt Coyne staggered to his desk, opened his laptop, and wrote a side-splittingly funny Facebook post about early fatherhood: Comparing his diaper-changing skills to that of a Formula One pit crew, birth to a Saw movie, and the sound of a baby crying at 3am to “having the inside of your skill sandpapered by an angry Viking,” he shared his observations with friends and family—and soon, to his surprise, the world. In the spirit of that post, which became an instant sensation, Man vs. Baby is the tale of one man’s journey through the first year of parenthood, told with wit, humor, and heart.

Part memoir, part tell-it-like-it-is parenting book, this is a ferociously funny, inventively foul-mouthed, and genuinely touching account of a baby’s first year, filled with relatable references to Harry Potter, McDonalds, and the villain in Die Hard. Matt covers everything you need to know, from labor (a good time to play “profanity bingo”) to what you might find in your baby’s diaper, a catalogue that includes The Phantom, The Expressionist, and The Jeff Goldblum. Capturing both the comic helplessness of new fatherhood and his deep love and admiration for his partner Lyndsay and child, Matt’s story will appeal to anyone who has a baby—or is even contemplating the idea. Whether you’re looking for a reprieve from the news cycle or a reminder of what’s most important in life, Man vs. Baby will have you laughing out loud—and, if you’re a new mother or father, filled with relief at being truly understood.

A fresh take on the bewilderment and joy of having a baby from a rip-roaringly talented new voice, this combination memoir and advice book is sure to charm parents everywhere.
Matt Coyne is a forty-something-year-old graphic designer from Sheffield, England. He is the wildly popular author of the blog and book, Man vs. Baby.
Praise for Matt Coyne and Man vs. Baby

"Coyne’s exasperated Facebook post about early parenthood (a baby’s cry is like “having the inside of your skull sandpapered by an angry Viking”) has been viewed 15 million times. That initial rant is now a funny memoir and parenting manual for the equally “inept.”"
—The New York Times Book Review

"If you’re looking for something for a dad who’s just emerging from the swampy fog of early parenting, Matt Coyne’s book may be for you ... Coyne’s book expands on that #realtalkdadlife attitude with a lively account of his first year of parenting."
—Vogue

"New parenthood is a stressful and confusing time, but author Matt Coyne takes it all into stride and infuses his experience with self-deprecating humor."
—Business Insider

"Finally! A straight-up honest book about parenting ... Irreverent and incredibly funny, this will have parents nodding along and laughing out loud."
—Booklist, starred review

"A great gift for any expectant or new parent, regardless of gender or parenting role ... Matt is simply hysterical."
–DONA International

“Hilarious but accurate account of finding your feet as a parent ... Matt Coyne's post has struck a chord with parents from all over the world.”
—Daily Mail

“Brutally honest rant on the reality of parenthood has taken the internet by storm.”
—Sunday Telegraph

"One of the best descriptions of fatherhood I have ever read."
—Ashton Kutcher

"It is a mix of hilariously funny, sweary, brutally honest, and actually, underneath it all, really quite lovely."
—Metro

"This book will make you wee!"
—Honest Mum

"He offers a comical, yet realistic take on almost everything you’ll encounter when you are first a parent … I have days when I need to know I’m not alone. This book is absolutely perfect for that! This is an ideal gift for both a new parent and a seasoned one too."
—Katy Kicker