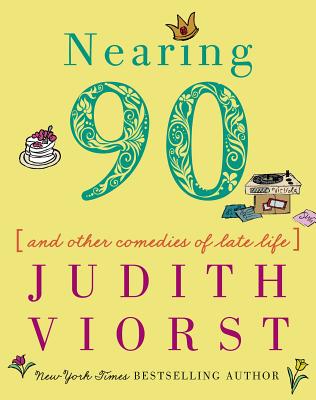 
On Our Shelves Now at:
The newest illustrated poetry collection in beloved author Judith Viorst’s “decade” series (from It’s Hard to Be Hip Over Thirty to Unexpectedly Eighty), exploring, with her signature savvy and humor, what it means to be an impending nonagenarian.

In Nearing Ninety, bestselling author Judith Viorst candidly shares the complicated joys and everyday tribulations that await us at the age of ninety, all with a large dose of humor and an understanding that nothing—well, almost nothing—in life should be taken too seriously. While she struggles to make it to midnight on New Year's Eve, while she’s starting to hear more eulogies than symphonies, while she’ll forever be disheartened by what she weighs (and forever unable to stop weighing herself), there is plenty to cherish at ninety: hanging out with the people she loves. Playing a relentless game of Scrabble. And still sleeping tush-to-tush with the same man to whom she’s been married for sixty years.

Accompanied by Laura Gibson’s whimsical illustrations, Nearing Ninety’s amusing and touching reflections make this collection relatable to readers of all ages. With the wisdom and spunk of someone who’s seen it all, Viorst gently reminds us that everybody gets old, and that the best medicine at any age is laughter.
Judith Viorst is the author of the beloved Alexander and the Terrible, Horrible, No Good, Very Bad Day, which has sold some four million copies; the Lulu books, including Lulu and the Brontosaurus; the New York Times bestseller Necessary Losses; four musicals; and poetry for children and young adults. Her most recent books of poetry include What Are You Glad About? What Are You Mad About? and Nearing Ninety.
“I have loved Judith Viorst for as long as I can remember. What a smart, charming, original and funny writer.  Nearing Ninety is just lovely, sometimes laugh-out-loud funny, often touching, always wise and real.”

“[Viorst] has been chronicling her own life stages since she was in her 30s with arch and witty poetry collections. . . . Ms. Viorst is terrific on the evolution and contortions of sexual desire; like Nora Ephron she also nails the quotidian.”
— Penelope Green

“Judith Viorst has always been the Magellan of Advancing Age, the Dr. Spock for Seniors, the doyenne of graceful depredation. Like all her previous ‘decade’ books, Viorst's Nearing Ninety illuminates my generation's ever-shrinking future with wisdom, grit, and laughter.”
— Letty Cottin Pogrebin, a founding editor of Ms. magazine and author of Getting Over Getting Older