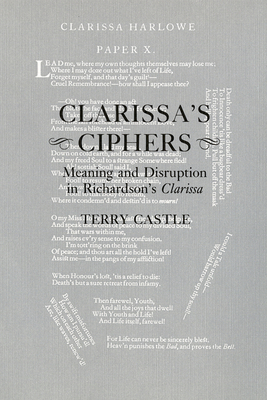 As Samuel Richardson's 'exemplar to her sex, ' Clarissa in the eponymous novel published in 1748 is the paradigmatic female victim. In Clarissa's Ciphers, Terry Castle delineates the ways in which, in a world where only voice carries authority, Clarissa is repeatedly silenced, both metaphorically and literally. A victim of rape, she is first a victim of hermeneutic abuse. Drawing on feminist criticism and hermeneutic theory, Castle examines the question of authority in the novel. By tracing the patterns of abuse and exploitation that occur when meanings are arbitrarily and violently imposed, she explores the sexual politics of reading.

Terry Castle is Walter A. Haas Professor in the Humanities at Stanford University. She is the author of many books, including The Apparitional Lesbian: Female Homosexuality and Modern Culture, Boss Ladies, Watch Out! Essays on Women, Sex, and Writing, and The Professor: A Sentimental Education.