The Eye of the Sandpiper: Stories from the Living World (Paperback) 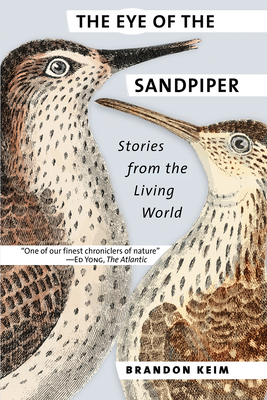 The Eye of the Sandpiper: Stories from the Living World (Paperback)

In The Eye of the Sandpiper, Brandon Keim pairs cutting-edge science with a deep love of nature, conveying his insights in prose that is both accessible and beautiful. In an elegant, thoughtful tour of nature in the twenty-first century, Keim continues in the tradition of Lewis Thomas, Stephen Jay Gould, and David Quammen, reporting from the frontiers of science while celebrating the natural world's wonders and posing new questions about our relationship to the rest of life on Earth.

The stories in The Eye of the Sandpiper are arranged in four thematic sections. Each addresses nature through a different lens. The first is evolutionary and ecological dynamics, from how patterns form on butterfly wings to the ecological importance of oft-reviled lampreys. The second section explores the inner lives of animals, which science has only recently embraced: empathy in rats, emotions in honeybees, spirituality in chimpanzees. The third section contains stories of people acting on insights both ecological and ethological: nourishing blighted rivers, but also caring for injured pigeons at a hospital for wild birds and demanding legal rights for primates. The fourth section unites ecology and ethology in discussions of ethics: how we should think about and behave toward nature, and the place of wildness in a world in which space for wilderness is shrinking.

By appreciating the nonhuman world more fully, Keim writes, I hope people will also act in ways that nourish rather than impoverish its life--which is, ultimately, the problem that needs to be solved at this Anthropocene moment, with a sixth mass extinction looming, once-common animals becoming rare, and Earth straining to support 7.5 billion people. The solution will come from a love of nature rather than chastisement or lamentation.