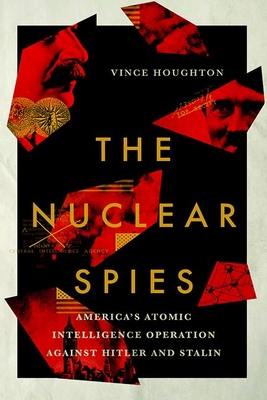 Why did the US intelligence services fail so spectacularly to know about the Soviet Union's nuclear capabilities following World War II? As Vince Houghton, historian and curator of the International Spy Museum in Washington, DC, shows us, that disastrous failure came just a few years after the Manhattan Project's intelligence team had penetrated the Third Reich and knew every detail of the Nazi 's plan for an atomic bomb. What changed and what went wrong?

Houghton's delightful retelling of this fascinating case of American spy ineffectiveness in the then new field of scientific intelligence provides us with a new look at the early years of the Cold War. During that time, scientific intelligence quickly grew to become a significant portion of the CIA budget as it struggled to contend with the incredible advance in weapons and other scientific discoveries immediately after World War II. As The Nuclear Spies shows, the abilities of the Soviet Union's scientists, its research facilities and laboratories, and its educational system became a key consideration for the CIA in assessing the threat level of its most potent foe. Sadly, for the CIA scientific intelligence was extremely difficult to do well. For when the Soviet Union detonated its first atomic bomb in 1949, no one in the American intelligence services saw it coming.

Vince Houghton is Historian and Curator at the International Spy Museum. He taught courses in Cold War history and intelligence history at the University of Maryland and is the host and creative director of Spycast, the Spy Museum's popular podcast. His work has been published widely in such media as Wall Street Journal, Washington Post, The Economist, Vanity Fair, and many others.