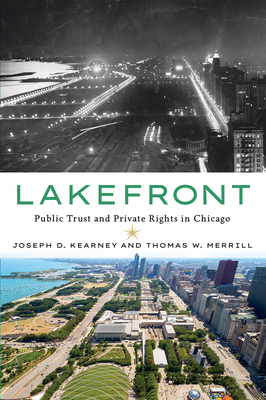 How did Chicago, a city known for commerce, come to have such a splendid public waterfront--its most treasured asset? Lakefront reveals a story of social, political, and legal conflict in which private and public rights have clashed repeatedly over time, only to produce, as a kind of miracle, a generally happy ending.

Joseph D. Kearney and Thomas W. Merrill study the lakefront's evolution from the middle of the nineteenth century to the twenty-first. Their findings have significance for understanding not only Chicago's history but also the law's part in determining the future of significant urban resources such as waterfronts.

The Chicago lakefront is where the American public trust doctrine, holding certain public resources off limits to private development, was born. This book describes the circumstances that gave rise to the doctrine and its fluctuating importance over time, and reveals how it was resurrected in the later twentieth century to become the primary principle for mediating clashes between public and private lakefront rights. Lakefront compares the effectiveness of the public trust idea to other property doctrines, and assesses the role of the law as compared with more institutional developments, such as the emergence of sanitary commissions and park districts, in securing the protection of the lakefront for public uses.

By charting its history, Kearney and Merrill demonstrate that the lakefront's current status is in part a product of individuals and events unique to Chicago. But technological changes, and a transformation in social values in favor of recreational and preservationist uses, also have been critical. Throughout, the law, while also in a state of continual change, has played at least a supporting role.

Joseph D. Kearney is Dean and Professor of Law at Marquette University. Thomas W. Merrill is the Charles Evans Hughes Professor of Law at Columbia University. Before entering academe, both authors clerked at the US Supreme Court and lived for many years in Chicago, where they practiced law and became captivated by the history of the city's lakefront.