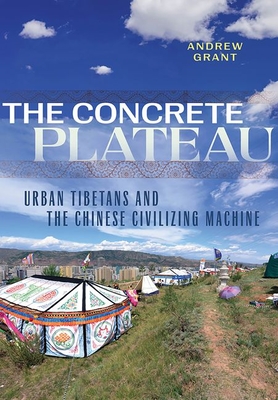 In The Concrete Plateau, Andrew Grant examines the ways that urbanization has extended into the Tibetan Plateau. Many people still think of Tibetans as not being urban, or that if they do live in cities, this means that they have lost something. Much of this is relates to the expectation that urbanization can only erode essential aspects of Tibetan culture. Grant pushes back against this notion through his in-depth exploration of Tibetans' experiences with urban life in the growing city of Xining, the largest city on the Tibetan Plateau.

Grant shows how Tibetans' actions to sustain their community challenge China's civilizing machine: a product of state-led urbanization that seeks to marginalize ethnic and indigenous groups. In their homes, neighborhoods, and businesses, Tibetans' assertion of cultural identity and modification of the built environment has prevented their assimilation into China's national urban project. The Concrete Plateau presents insights into the politics of urban development not only in Tibet and China, but to contexts of urban diversity all around world. Its findings are important for studies of urban development in the Global South where in-migrating ethnic and indigenous groups are negotiating top-down urban projects. Grant's book offers a profound rethinking of urbanization, rurality, culture, and the politics of place.

Andrew Grant holds a PhD in Geography from the University of California, Los Angeles. Follow him on Twitter @angrant_1.