Ethics of Narrative: Essays on History, Literature, and Theory, 1998-2007 (Paperback) 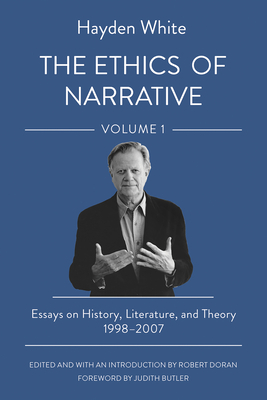 Ethics of Narrative: Essays on History, Literature, and Theory, 1998-2007 (Paperback)

Hayden White is widely considered to be the most influential historical theorist of the twentieth century. The Ethics of Narrative brings together nearly all of White's uncollected essays from the last two decades of his life, revealing a lesser-known side of White: that of the public intellectual. From modern patriotism and European identity to Hannah Arendt's writings on totalitarianism, from the idea of the historical museum and the theme of melancholy in art history to trenchant readings of Leo Tolstoy and Primo Levi, the first volume of The Ethics of Narrative shows White at his most engaging, topical, and capacious.

Expertly introduced by editor Robert Doran, who lucidly explains the major themes, sources, and frames of reference of White's thought, this volume features five previously unpublished lectures, as well as more complete versions of several published essays, thereby giving the reader unique access to White's late thought. In addition to historical theorists and intellectual historians, The Ethics of Narrative will appeal to students and scholars across the humanities in such fields as literary and cultural studies, art history and visual studies, and media studies.

Hayden White (1928-2018) was Professor Emeritus of the History of Consciousness at the University of California, Santa Cruz. His books include Metahistory, Tropics of Discourse, The Content of the Form, Figural Realism, and The Practical Past. Robert Doran is Professor of French and Comparative Literature at the University of Rochester, the author of The Ethics of Theory and The Theory of the Sublime from Longinus to Kant, and the editor of Hayden White's The Fiction of Narrative. Judith Butler is the Maxine Elliot Professor of Comparative Literature at the University of California, Berkeley.