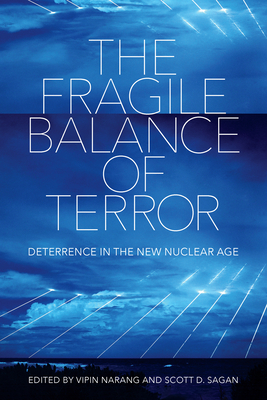 In The Fragile Balance of Terror, the foremost experts on nuclear policy and strategy offer insight into an era rife with more nuclear powers. Some of these new powers suffer domestic instability, others are led by pathological personalist dictators, and many are situated in highly unstable regions of the world--a volatile mix of variables.

The increasing fragility of deterrence in the twenty-first century is created by a confluence of forces: military technologies that create vulnerable arsenals, a novel information ecosystem that rapidly transmits both information and misinformation, nuclear rivalries that include three or more nuclear powers, and dictatorial decision making that encourages rash choices. The nuclear threats posed by India, Pakistan, Iran, and North Korea are thus fraught with danger.

The Fragile Balance of Terror, edited by Vipin Narang and Scott D. Sagan, brings together a diverse collection of rigorous and creative scholars who analyze how the nuclear landscape is changing for the worse. Scholars, pundits, and policymakers who think that the spread of nuclear weapons can create stable forms of nuclear deterrence in the future will be forced to think again.

Vipin Narang is the Frank Stanton Professor of Nuclear Security and Political Science at the Massachusetts Institute of Technology. He is the author of Nuclear Strategy in the Modern Era and Seeking the Bomb. Follow him on Twitter @narangvipin. Scott D. Sagan is the Caroline S. G. Munro Professor of Political Science, the Mimi and Peter Haas University Fellow in Undergraduate Education, and Senior Fellow and Codirector at the Center for International Security and Cooperation (CISAC) at Stanford University. He is the author of The Limits of Safety and coauthor of The Spread of Nuclear Weapons.