To Govern Is to Serve: An Essay on Medieval Democracy (Paperback) 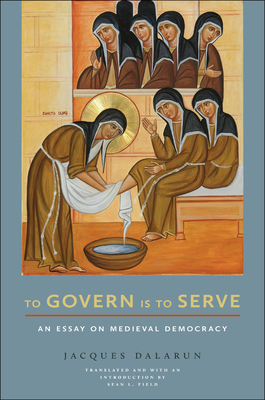 To Govern Is to Serve: An Essay on Medieval Democracy (Paperback)

To Govern Is to Serve explores the practices of collective governance in medieval religious orders that turned the precepts of the Gospels--most notably that "the first will be last, the last will be first"--into practices of communal deliberation and the election of superiors. Jacques Dalarun argues that these democratic forms have profoundly influenced modern experiences of democracy, in particular the idea of government not as domination but as service.

Dalarun undertakes meticulous textual analysis and historical research into twelfth and thirteenth-century religious movements--from Fontevraud and the Paraclete of Abelard and Heloise through St. Dominic and St. Francis--that sought their superiors from among the less exalted members of their communities to chart how these experiments prefigured certain aspects of modern democracies, those allowing individuals to find their way forward as part of a collective. Wide ranging and deeply original, To Govern Is to Serve highlights the history of the reciprocal bonds of service and humility that underpin increasingly fragile democracies in the twenty-first century.