The Optical Corrections of the Doric Temple: Form and Meaning in Greek Sacred Architecture (Paperback) 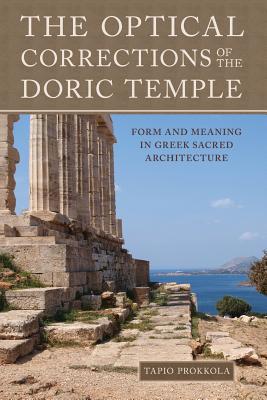 The Optical Corrections of the Doric Temple: Form and Meaning in Greek Sacred Architecture (Paperback)


Not On Our Shelves—Ships in 1-5 Days
(This book cannot be returned.)
The optical corrections of the Doric temple were first mentioned by the Roman architect and writer Vitruvius. According to him they were meant to prevent optical distortions that otherwise would make the temple look faulty. This explanation has ever since been repeated by most scholars although some of them maintain that the corrections were actually implemented to bring vitality to the otherwise too static appearance of the temple. Yet, it is obvious that these" distortions" didn't bother later architects either during the Roman age or the Renaissance. The author is both an architect and a historian of ideas. This book represents an entirely new theory about the meaning of the corrections. Prokkola claims that the corrections were simply tools used by the architects designing these temples to make the temple a unity although it was composed of many (Doric columns), in a word, a unity in plurality. He shows that the task of creating a unity out of a row of these round, fluted, and tapering columns with entasis would be difficult enough for any architect of any time. The ideal of unity in plurality based on the heroic outlook inherited from the heroic past became the most fundamental ideal for the Dorian Greeks living in city-states along with the development of the polis. All the most important spheres of life were organized according to this ideal; the polis itself, its military organization, the hoplite phalanx, and - finally - the Doric temple that was the ultimate symbol of the city-state. This ideal as such is well known in the history of ideas, but it is usually connected to Neo-Platonism and early Christianity; seldom to the archaic and classical Greeks. However, the analysis of some texts of the Platonic philosophers presented in this book shows clearly that these ideals were in fact very essential in their thinking During the archaic age, many different, often contrary approaches were attempted to solve the contradiction between unity and plurality. Some temples were built using very heavy constructions emphasizing thus the aspect of unity to the extreme, while some others were more open and pavilion-like emphasizing thus the ideal of plurality, until finally in the classical era, the final synthesis was found in classical temples, precisely with the help of the optical corrections. This new theory is able to explain many questions about Doric temples that have hitherto remained obscure. Examples are: the spatial nature of the temple precinct, the meaning of the columns, the meaning of the optical corrections, the truth about the so-called Doric corner-conflict, the reason for the tapering and entasis of the Doric column, the meaning of the Doric flutings, the lack of base under the Doric column as well as the nature of the Doric capital, etc. Prokkola shows further that the interpretation of Vitruvius was based on a misinterpretation of the words of Ictinus, the designer of the Parthenon because of different ideals between Classical Greece and the Early Roman Empire.
The author is both an architect and a historian of ideas. This background gives him exceptional capability to explore how ideals affect architectural creation during different historical epochs. Many of his views may be regarded as unorthodox but they certainly reveal new aspects about both the history of ideas and the history of architecture as well.