Empire of Guns: The Violent Making of the Industrial Revolution (Paperback) 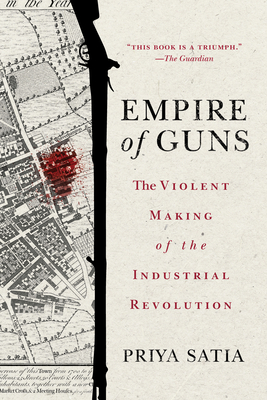 Empire of Guns: The Violent Making of the Industrial Revolution (Paperback)

A rich and ambitious history reframing the Industrial Revolution, the expansion of the British empire, and the emergence of industrial capitalism as inextricable from the gun trade.

From the seventeenth to the nineteenth century, the industrial revolution transformed Britain from an agricultural and artisanal economy to one dominated by industry, ushering in unprecedented growth in technology and trade and putting the country at the center of the global economy. But the commonly accepted story of the industrial revolution, anchored in images of cotton factories and steam engines invented by unfettered geniuses, overlooks the true root of economic and industrial expansion: the lucrative military contracting that enabled the country's near-constant state of war in the eighteenth century. Demand for the guns and other war materiel that allowed British armies, navies, mercenaries, traders, settlers, and adventurers to conquer an immense share of the globe in turn drove the rise of innumerable associated industries, from metalworking to banking.

Bookended by the Glorious Revolution of 1688 and the end of the Napoleonic Wars in 1815, this book traces the social and material life of British guns over a century of near-constant war and violence at home and abroad. Priya Satia develops this story through the life of prominent British gun-maker and Quaker Samuel Galton Jr., who was asked to answer for the moral defensibility of producing guns as new uses like anonymous mass violence rose. Reconciling the pacifist tenet of his faith with his perception of the economic realities of the time, Galton argued that war was driving the industrial economy, making everyone inescapably complicit in it. Through his story, Satia illuminates Britain's emergence as a global superpower, the roots of the government's role in economic development, and the origins of our own era's debates over gun control and military contracting.

Priya Satia is the Raymond A. Spruance Professor of International History and Professor of British History at Stanford University. She is the author of Spies in Arabia: The Great War and the Cultural Foundations of Britain's Covert Empire in the Middle East (2009), and her writing has appeared in Slate, the Financial Times, the Nation, and the Huffington Post, among other publications.