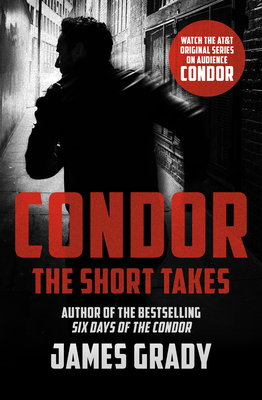 
In Stock—Click for Locations
The legendary CIA spy is back--in a "superb" collection featuring an all-new novella, by the New York Times-bestselling author of Six Days of the Condor (Publishers Weekly, starred review). James Grady, "king of the modern espionage thriller" (George Pelecanos, award-winning writer/producer of The Wire), first introduced his clandestine CIA operative--codename: Condor--in a debut novel that became Three Days of the Condor, one of the key films of the paranoid era of the 1970s, and is now the basis for the hit AT&T original series, Condor, starring Max Irons and William Hurt. In this explosive collection featuring a new introduction on the writing and publication history of Condor, a never-before-published original novella, and short fiction collected for the first time, Grady brings his covert agent into the twenty-first century. From the chaos of 9/11 to the unprecedented Russian cyber threats, Condor is back. In condor.net, the intelligence analyst chases an unfathomable conspiracy that begins in Afghanistan and leads to the secrets of his own superiors. In Caged Daze of the Condor, Jasmine Daze of the Condor, and Next Day of the Condor, the paranoia of National Security's sworn soldier reaches a screaming pitch when he's locked behind the walls of the CIA's private insane asylum. Classified documents in the basement of the Library of Congress draw Condor into a murderous subterranean world where no one can be trusted in Condor in the Stacks. And in Russian Roulette of the Condor, the striking new novella shot through with the biggest spy scandal since the Cold War, the underground patriot faces a dictator determined to turn American politics into an insidious spy game. Brace yourself for six shots of the iconic Condor from James Grady, who has been called a "master of intrigue" by John Grisham, and whose prose was compared to George Orwell and Bob Dylan by the Washington Post.
James Grady (b. 1949) is the author of screenplays, articles, and over a dozen critically acclaimed thrillers. Born in Shelby, Montana, Grady worked a variety of odd jobs, from hay bucker to gravedigger, before graduating from the University of Montana with a degree in journalism. In 1973, after years of acquiring rejection slips for short stories and poems, Grady sold his first novel: Six Days of the Condor, a sensational bestseller that was eventually adapted into a film starring Robert Redford. After moving to Washington, DC, Grady worked for a syndicated columnist, investigating everything from espionage to drug trafficking. He quit after four years to focus on his own writing, and has spent the last three decades composing thrillers and screenplays. His body of work has won him France's Grand Prix du Roman Noir, Italy's Raymond Chandler Award, and Japan's Baka-Misu literary prize. Grady's most recent novel is Mad Dogs (2006). He and his wife live in a suburb of Washington, DC