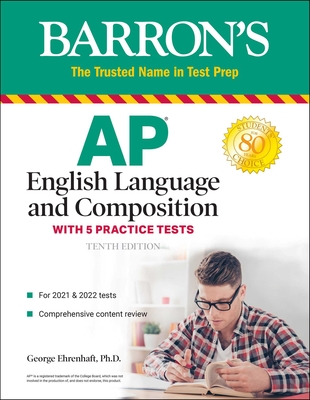 
On Our Shelves Now at:
Be prepared for exam day with Barron’s. Trusted content from AP experts!

Written by Experienced Educators Be Confident on Exam Day
George Ehrenhaft has been writing for Barron's for over three decades. During that time he has been the author or co-author of books on the SAT, the ACT, and both the AP English Literature and AP English Language exams. Other titles relate to English grammar and essay writing, especially writing college application essays. He has also written several Barron's Book Notes titles about literature, including The Grapes of Wrath and A Streetcar Named Desire.

Ehrenhaft spent most of his career teaching English in Westchester County, New York, at Fox Lane and Mamaroneck High Schools. He is now a resident of Moraga, California, where he has become a prolific watercolor painter.

About the Publisher
In the 1930s, Manuel H. Barron opened a bookstore in Brooklyn, New York.

People from the community asked Mr. Barron about books that might be available to help their children study for the New York State Regents exams. After realizing there wasn't anything available, Mr. Barron created his own study guides.

80 years later, Barron's has helped millions of people prepare for their next step.