Hellboy: Into the Silent Sea (Hardcover) 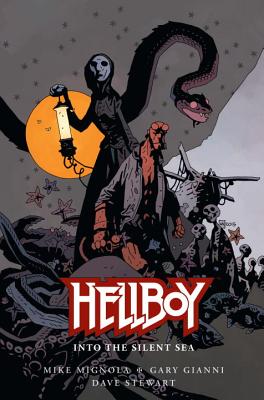 Hellboy: Into the Silent Sea (Hardcover)


Special Order—Subject to Availability
Hellboy sets sail from the wreckage of a deserted island only to cross paths with a ghost ship. Taken captive by the phantom crew that plans to sell him to the circus, Hellboy is dragged along by a captain who will stop at nothing in pursuit of a powerful sea creature. Following the events of Hellboy: The Island, Gary Gianni draws Hellboy in an original graphic novel.

"The master of modern horror comics."-IGN

"... Mignola's simple but elegant panel design should be studied by everyone who is or who wants to be a cartoonist. The script is a delight, too, as Hellboy's down-to-earth anger and everyman astonishment remains funny and refreshing." -Publishers Weekly
Mike Mignola's fascination with ghosts and monsters began at an early age; reading Dracula at age twelve introduced him to Victorian literature and folklore, from which he has never recovered. Starting in 1982 as a bad inker for Marvel Comics, he swiftly evolved into a not-so-bad artist. By the late 1980s, he had begun to develop his own unique graphic style, with mainstream projects like Cosmic Odyssey and Batman: Gotham by Gaslight. In 1994, he published the first Hellboy series through Dark Horse. There are thirteen Hellboy graphic novels (with more on the way), several spinoff titles (B.P.R.D., Lobster Johnson, Abe Sapien, and Sir Edward Grey: Witchfinder), prose books, animated films, and two live-action films starring Ron Perlman. Along the way he worked on Francis Ford Coppola's film Bram Stoker's Dracula (1992), was a production designer for Disney's Atlantis: The Lost Empire (2001), and was the visual consultant to director Guillermo del Toro on Blade II (2002), Hellboy (2004), and Hellboy II: The Golden Army (2008). Mike's books have earned numerous awards and are published in a great many countries. Mike lives in Southern California with his wife, daughter, and cat. The author lives in Los Angeles, CA.
“A gorgeous, atmospheric dose of maritime goth fun.” - PASTE MAGAZINE

“Gianni’s artwork evokes horror masters like Bernie Wrightson and Steve Bissette’s comics, creating these deep and textured images where the story’s magic and its horror are contained in every drawing and every line.”--NEWSARAMA

“Honestly, you should probably just read all Hellboy. Hellboy is pretty much never anything short of brilliant. But, if for some reason you haven't taken the leap yet and want an easy entry into what has become one of the most fascinating fleshed-out universes in comics, you could certainly do worse than this month's original graphic novel, Hellboy: Into the Silent Sea….The line work is provided by Gary Gianni, who has illustrated the Prince Valiant newspaper strip, The Shadow comic books, George R.R. Martin's A Knight of the Seven Kingdoms novel and much more. His art is astonishing in its detail, looking like it may be a centuries-old wood carving and not a comic book…. This book is a perfect place to jump into the macabre, beautiful world of Hellboy, whether it's your first time or you're returning to it after a long time lost at sea.”--BLASTR


“Like nothing we’ve encountered before with Hellboy. In both art and story, this book is an exciting voyage into the unknown.”--COMICON.COM

Praise for RISE OF THE BLACK FLAME

“A rare example of a worthy prequel.”--NEWSARAMA

“Hellboy continues to entertain and, over twenty years on, still stands out as one of the more original of titles out there on the shelves today.”--TRIPWIRE