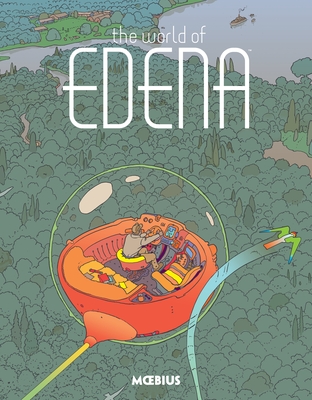 
Not On Our Shelves—Ships in 1-5 Days
Working closely with Moebius Productions in France, Dark Horse is putting the work of a master storyteller back in print--with some material in English for the first time!

Stel and Atan are interstellar investigators trying to find a lost space station and its crew. When they discover the mythical paradise planet Edena, their lives are changed forever. The long out-of-print Edena Cycle from Moebius gets a deluxe hardcover treatment! Moebius's World of Edena story arc is comprised of five chapters--Upon a Star, Gardens of Edena, The Goddess, Stel, and Sra--which are all collected here.

A storyboard artist and designer (Alien, Tron, The Fifth Element, among many others) as well as comic book master, Moebius's work has influenced creators in countless fields.

In 1983 he co-founded the Aedena company and settled in Los Angeles. During his stay in the USA, he saw his most important works published by Marvel Comics. He also illustrated an episode of Silver Surfer by Stan Lee.

In addition to his large comics and illustration output, Moebius remained active in the film industry as well. In addition to providing preliminary designs for such films as Alien, Tron, The Abyss, Masters of the Universe, and The Fifth Element, Moebius provided concept art for El Topo director Alejandro Jodorowsky's never-realized adaptation of Frank Herbert's Dune.
Moebius passed away in Paris on March 10, 2012, at the age of 73.