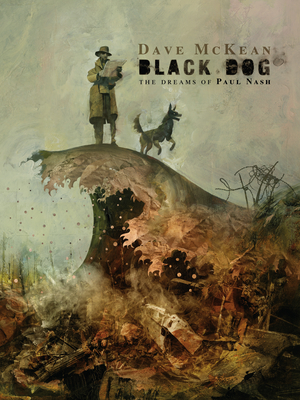 
On Our Shelves Now at:
New edition with bonus material by Dave McKean!

Dark Horse proudly presents a new, second edition, of the graphic novel by legendary artist Dave McKean, based on the life of Paul Nash, a surrealist painter during World War 1. The Dreams of Paul Nash deals with real soldier's memoirs and all the stories add up to a moving piece about how war and extreme situations change us, how we deal with that pain, and, in Nash's case, how he responded by turning his landscapes into powerful and fantastical psychoscapes.

The second edition of Black Dog: The Dreams of Paul Nash features a new cover by Dave McKean, along with 15 pages of new bonus material examining the creation of the book.

David McKean is an illustrator, photographer, comic book artist, graphic designer, filmmaker and musician. His work incorporates drawing, painting, photography, collage, found objects, digital art and sculpture. After a trip to New York in 1986 during which he failed to find work as a comics artist, McKean met writer Neil Gaiman and the pair collaborated on a short graphic novel of disturbing childhood memories, Violent Cases, published in 1987. This was followed in 1988 by a Black Orchid miniseries (again with Gaiman) and Hellblazer covers for DC Comics. Beginning in 1989 he produced the covers for Gaiman's celebrated series The Sandman, all its collected editions and many of its spin-offs, and the Batman graphic novel, Arkham Asylum: A Serious House on Serious Earth, with writer Grant Morrison (1989). McKean has gone on to collaborate further with Neil Gaiman in both print and film.