The Unbelievable Unteens: From the World of Black Hammer Volume 1 (Paperback) 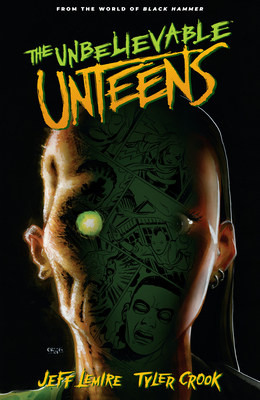 The Unbelievable Unteens: From the World of Black Hammer Volume 1 (Paperback)


Not On Our Shelves—Ships in 1-5 Days
From the world of the Eisner Award-winning Black Hammer series comes this meta team superhero saga taking place between two different worlds.


After signing at a comic book convention, Unbelievable Unteens artist Jane Ito finds herself visited by one of the characters from her own creation—but was it her own creation? Were the Unteens an actual school of teenaged misfit superheroes who battled supervillains under the lead of the mysterious Dr. Miles Moniker? And if so who wiped their memories and why?  As Jane’s world is turned upside down and she learns the true nature of her identity she discovers a sinister plot leading her to assemble a team she had suspected was purely fictional.

Collects issues #1-4 of The Unbelievable Unteens and featuring a sketchbook section and pinups by Emi Lenox, John McCrea, Tonci Zonjic, and Ray Fawkes!

New York Times bestselling author, Jeff Lemire, is the creator of the acclaimed graphic novels Sweet Tooth, Essex County, The Underwater Welder and Trillium. His upcoming projects include the original graphic novel Roughneck from Simon and Schuster, as well as the sci-fi series Descender for Image Comics (with Dustin Nguyen) and Black Hammer for Dark Horse Comics (with Dean Ormston). Jeff has also written Green Arrow, Justice League and Animal Man for DC Comics and Hawkeye for Marvel Comics. In 2008 and in 2013 Jeff won the Schuster Award for Best Canadian Cartoonist. He has also received The Doug Wright Award for Best Emerging Talent and the American Library Association's prestigious Alex Award, recognizing books for adults with specific teen appeal. He has also been nominated for 8 Eisner awards, 7 Harvey Awards and 8 Shuster Awards. In 2010 Essex County was named as one of the five Essential Canadian Novels of the Decade. He currently lives and works in Toronto with his wife and son.