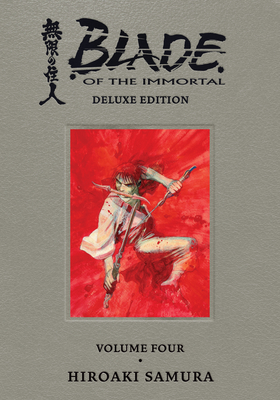 
Not On Our Shelves—Ships in 1-5 Days
Over 600 blood-soaked pages, collecting Hiroaki Samura's captivating "Secrets," "Fall Frost," and "Beasts" story arcs!

Rin's purportedly immortal protector, Manji, was enlisted to help her hunt down the ruthless Itto-ryü sword school that murdered her parents. With Rin searching for the eccentric Itto-ryū leader Anotsu Kagehisa on her own now, Manji joins forces with Magatsu--a charming, fan-favorite killer--to take on the evil Shira! Hyakurin and her fellow Mugai-ryū warriors tangle with the devious Itto-ryū clan, too, and suffer serious losses!

Collects Blade of the Immortal volumes 10 to 12 in the original 7x10 serialized format, in a faux-leather hardcover treatment, and with a bookmark ribbon.
Hiroaki Samura is a Japanese writer/illustrator and creator of Blade of the Immortal, as well as several other short works. He has also done various illustrations for magazines.