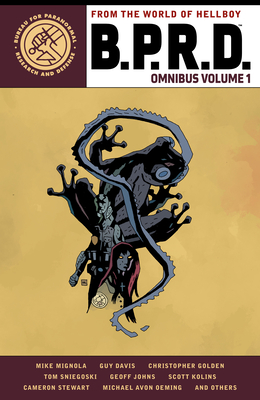 
On Our Shelves Now at:
Join Hellboy creator Mike Mignola and a slew of talented writers and artists as they bring you the first volume in a series of omnibuses that collect the main B.P.R.D. storyline.

In 2001, Hellboy quit the B.P.R.D., leaving its roster of special agents to defend the world from any occult threats, and the growing menace of the frog army. Now their adventures are collected in one continuous saga, following the exploits of Abe Sapien, Liz Sherman, Roger the Homunculus, Johann Krauss, Kate Corrigan, Ashley Strode, and many more from the war on frogs through the end of Ragna Rok.

Collects B.P.R.D.: Hollow Earth & Other Stories, B.P.R.D.: The Soul of Venice & Other Stories, and B.P.R.D.: Plague of Frogs.
Mike Mignola's fascination with ghosts and monsters began at an early age; reading Dracula at age twelve introduced him to Victorian literature and folklore, from which he has never recovered. Starting in 1982 as a bad inker for Marvel Comics, he swiftly evolved into a not-so-bad artist. By the late 1980s, he had begun to develop his own unique graphic style, with mainstream projects like Cosmic Odyssey and Batman: Gotham by Gaslight. In 1994, he published the first Hellboy series through Dark Horse. There are thirteen Hellboy graphic novels (with more on the way), several spin-off titles (B.P.R.D., Lobster Johnson, Abe Sapien, and Sir Edward Grey: Witchfinder), prose books, animated films, and two live-action films starring Ron Perlman. Along the way he worked on Francis Ford Coppola's film Bram Stoker's Dracula (1992), was a production designer for Disney's Atlantis: The Lost Empire (2001), and was the visual consultant to director Guillermo del Toro on Blade II (2002), Hellboy (2004), and Hellboy II: The Golden Army (2008). Mike's books have earned numerous awards and are published in a great many countries. Mike lives in Southern California with his wife, daughter, and cat.
“Few superheroes have cooler comrades than Hellboy, the Hades-bred occult investigator—and now finally this supporting cast has grown its own X-Men meets X-Files showcase.”–Entertainment Weekly (B.P.R.D.: Plague of Frogs Volume 1)