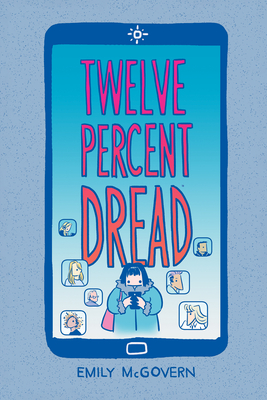 
Not On Our Shelves—Ships in 1-5 Days
A fast-paced, laugh-a-page graphic novel about friendship, capitalism, and never putting your f***ing phone away!

Katie and Nas are best friends, exes, co-dependents. They share everything, including a tiny room in a North London townhouse belonging to their landlord Jeremy, former host of the hit 90s show ‘Football Lads’.

While Katie bounces from job to job and obsesses about falling behind in life, Nas has bigger things in mind—waiting endlessly for their visa to come through, while working on a seismic art project that will revolutionize politics and society as we know it. Their friend Emma, meanwhile, seems to have it all figured out—job, mortgage, engagement—yet the long hours working for tech giant Arko and endless wedding admin prove equally dread-inducing.

But when Katie’s latest job finds her tutoring the daughter of Arko’s formidable CEO, Michelle, and Emma welcomes the eccentric and enigmatic Alicia to her team at Arko, none of the three women are aware that their lives—and possibly the future of society itself—are about to change forever.

Twelve Percent Dread is a fast-paced, laugh-a-page graphic novel about friendship, capitalism, and never putting your f***ing phone away from Emily McGovern, author of Bloodlust & Bonnets and the hugely popular webcomic My Life As A Background Slytherin.

Emily grew up in Brussels and writes bios for herself in the third person cos it looks way more professional. She graduated from University College London in 2014 with a degree in Russian Studies, and now works full-time as a cartoonist.

In 2016 Emily’s short comic 'Bloodlust & Bonnets' was shortlisted for the prestigious Observer/Jonathan Cape Graphic Short Story Prize and her comic “So You’re Voting Tory” was published in The Corbyn Comic Book by Self Made Hero in September 2017. Her first full-length graphic novel will be released in September 2019.