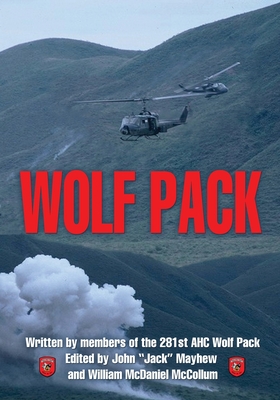 The 281st AHC gun platoon named the "Wolf Pack" was the 3d platoon where a select and well-known platoon of professional helicopter pilots and crew flying the C-model Huey UH-1C known as the Charlie Model from 1965 through 1971 in Vietnam. These men were like the knights of old, going day after day in twos or threes, to hold the battlefield against all comers and to do battle in defense of the Fifth Special Forces and its long-range reconnaissance unit. Detachment B-52, Project Delta. Pilots and aircrews felt like they were invincible, 6 Feet Tall, bulletproof, and kin to the gun-slingers of the old west. Unfortunately, some made the ultimate sacrifice, others were wounded, and to this day, some still have to deal with that time. Indeed, the legacy of the 281st Wolf Pack is a story of a remarkable, unyielding spirit and uncompromisingly fierce defiance in the face of death with a determined enemy.

This book is a work of respect and honor covering the life and times of the U.S. Army's first special operations helicopter company, the "Wolf Pack." As an element of the 281st Assault Helicopter Company, the Wolf Pack provided armed helicopter support for the special forces units in Vietnam, with emphasis on aerial weapons support for Project Delta and the MACV Recondo School, which was recognized as the deadliest school in the armed forces. This book contains the real-time stores of the men who flew and maintained the helicopters that operated under the banner; "Hell From Above." For the most part, these young men were fresh out of school and had been expeditiously trained to fly and maintain their helicopters. Few had previous combat experience. In performing one of the most dangerous missions of the war, these young men, proudly known as the "Wolf Pack," developed aerial gunnery and support skills that identified them as one of the top helicopter gun units of the war This book tells their story and honors each of them.