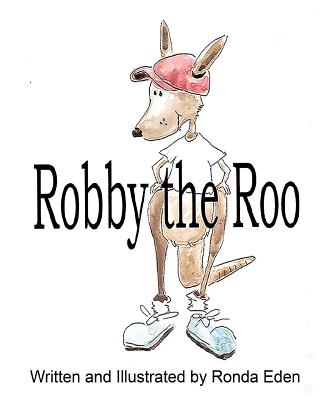 
Not On Our Shelves—Ships in 1-5 Days
(This book cannot be returned.)
Robby the Roo Like most youngsters Robby loves to dream up interesting hobbies to take him on fantastic adventures. Like most youngsters he often gets more than he bargains for See what happens when Robby builds a canoe that attracts way too many curious passengers Paddle along the river with him and his friends and find what lies up ahead. Most of all, have loads of fun and laughs with Robby the Roo.
Ronda Eden a.k.a 'Ronnie Roo' Smith Valley, Wellington, Nevada USA Ronnie was born in Adelaide, Australia (see her here pictured with a jar of Vegemite in her left hand) and came to the USA in 1989 on a teaching exchange in Grand Lake, Colorado. In 1998 she earned her Bachelor of Fine Arts from the University of Colorado while working in a multitude of fields from waitressing and bartending to Aussie Storytelling. Now she has settled down with hubby Mernie and four horses in picturesque Smith Valley, Nevada. Over the years Ronnie has maintained a good studio practice while enjoying the great outdoors from the back of an endurance horse. Her plans for the future include reviving another kiddies book she illustrated a few years ago called, The Brothers Foot. Stay tuned.