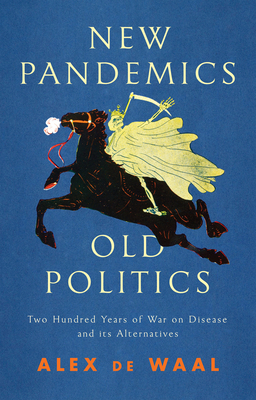 New Pandemics, Old Politics explores how the modern world adopted a martial script to deal with epidemic disease threats, and how this has failed - repeatedly. Europe first declared 'war' on cholera in the 19th century. It didn't defeat the disease but it served purposes of state and empire. In 1918, influenza emerged from a real war and swept the world unchecked by either policy or medicine. Forty years ago, AIDS challenged the confidence of medical science. AIDS is still with us, but we have learned to live with it - chiefly because of community activism and emancipatory politics.

Today, public health experts and political leaders who failed to listen to them agree on one thing: that we must 'fight' Covid-19. There's a consensus that we should target individual pathogens and suppress them - rather than address the reasons why our societies are so vulnerable. Arguing that this consensus is mistaken, Alex de Waal makes the case for a new democratic public health for the Anthropocene.

Alex de Waal is Executive Director of the World Peace Foundation and a Research Professor at The Fletcher School at Tufts University.