England in the Age of Chivalry . . . And Awful Diseases: The Hundred Years' War and Black Death (Hardcover) 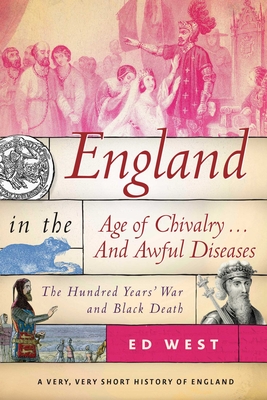 England in the Age of Chivalry . . . And Awful Diseases: The Hundred Years' War and Black Death (Hardcover)


Special Order—Subject to Availability
A revealing glimpse into the tumultuous history of England’s medieval period, full of knights in shining armor and terrible peasant suffering.
Covering the violent and disease-ridden period between 1272 to 1399, England in the Age of Chivalry. . . And Awful Diseases covers the events, personages and ideas most commonly known as "medieval". This includes Geoffrey Chaucer, the Peasants revolt, the Scottish wars of independence, the Great Famine of 1315, the Black Death and the 100 Years War. Central to this time is King Edward III, who started the 100 Years War and defined the concept of chivalry, including England's order of the garter. His legacy continues to shape our view of England’s history and is crucial in understanding the development of Europe.
Ed West is the recently appointed associate director of UK2020, a British policy think tank. Before that, Ed was deputy editor of the Catholic Herald and a frequent contributor to the Daily Telegraph, Evening Standard, Daily Express, and the Guardian. He is a popular British twitter personality and blogs for the Spectator. He currently lives in London.