The Wind Book for Rifle Shooters: How to Improve Your Accuracy in Mild to Blustery Conditions (Hardcover) 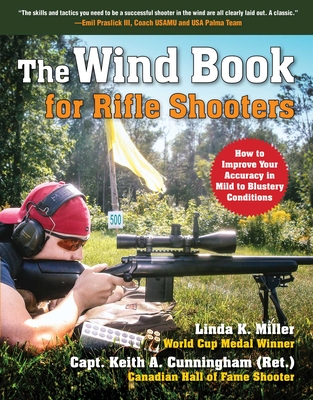 The Wind Book for Rifle Shooters: How to Improve Your Accuracy in Mild to Blustery Conditions (Hardcover)

Now, champion shooters Linda K. Miller and Keith A. Cunningham reveal everything they wish they’d known about reading the wind before they started shooting (instead of having to learn as they went along) in concise, easy-to-read terms and accompanied with handy ninety-five diagrams. The Wind Book for Rifle Shooters contains straightforward guidance on the simple thought process they use to read the wind, the techniques and tactics they use to win matches, and the underlying skills that support both.

Let these champions show you how to put together a simple wind-reading toolbox for calculating wind speed, direction, deflection, and drift. Then learn how to use these tools to read flags and mirage, record and interpret your observations, and time your shots to compensate for wind. Other topics covered include:

Linda K. Miller is an internationally certified marksmanship coach. She is the editor of CoachNet, a designer of competitive and professional marksmanship courses, and an author of numerous articles on shooting skills. She was a medal-winning member of Canada’s shooting team and became the first woman to win the Ontario Lieutenant Governor’s Medal for fullbore shooting. She resides in Ontario, Canada.

Keith A. Cunningham has more than twenty-five years of experience with the Canadian Forces and the US Army. He has considerable practical experience, including a combat tour in Vietnam, peacekeeping, and countersniper operations in Cyprus. He has taught marksmanship courses at the Canadian Forces Infantry School and at several police forces in Ontario. An internationally certified shooting coach, he has successfully coached numerous teams to national and international excellence. He resides in Ontario, Canada.