Snakemaster: Wildlife Adventures with the World?s Most Dangerous Reptiles (Paperback) 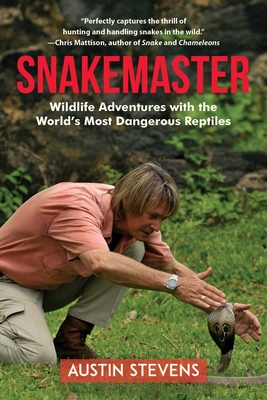 Snakemaster: Wildlife Adventures with the World?s Most Dangerous Reptiles (Paperback)


Special Order—Subject to Availability
Known as the original “Snakemaster” from his various television shows, Austin Stevens is one of the most famous herpetologists in the world. From his show Austin Stevens: Snakemaster on Animal Planet to his many appearances in the media, Stevens is known as an incredibly smart, yet incredibly insane animal lover.

In Snakemaster, Austin Stevens tells incredible stories of his many run-ins with dangerous animals and reptiles. From wrestling with a reticulated python to panicking after being bitten by the infamous Gaboon viper, Stevens brings you into his world of wildlife and tells the story of how a boy from Pretoria, South Africa, became one of the most widely known herpetologists in the world.

With incredible photographs taken by Stevens himself, you’ll be able to place yourself in his world—from the deserts of Africa to the jungles of Borneo. Sharing incredible stories of his love of animals and nature, this one-of-a-kind collection of stories will make you laugh, cry, and shiver with fear!
Austin Stevens is best known as the “Snakemaster” from his hit shows on Animal Planet, Discovery Channel, and the National Geographic Channel. Originally from South Africa, Stevens is a herpetologist, author, and wildlife photographer. He is currently the Guinness World Record holder for a “snake sit-in,” when he lived in a ten-by-thirteen-foot glass cage with thirty-six venomous snakes (including black mambas) for an incredible 107 days and nights. He currently resides in Queensland, Australia.