If You Give a Kitty a Cocktail (Addicted Animals) (Paperback) 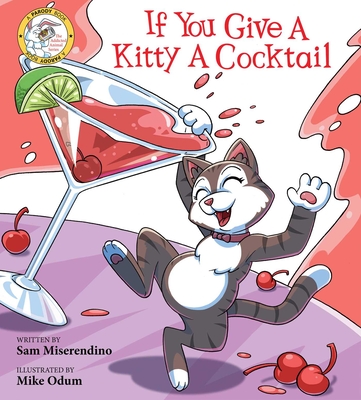 If You Give a Kitty a Cocktail (Addicted Animals) (Paperback)


Not On Our Shelves—Ships in 1-5 Days
A raucous parody—DEFINITELY NOT FOR CHILDREN—of the popular If You Give a Mouse a Cookie series, Sam Miserendino and Mike Odum present the third installment of the Addicted Animal Series.

Following the success of other adult-themed parodies of children’s books, author Sam Miserendino presents a delightful tale that will entertain readers with its charming combination of innocence and lack thereof. A humorous play off of the famous If You Give a Moose a Muffin, the book tells the story of a kitty who plunges into a night of adventures and misadventures after she invites her friends over for a cocktail or two...or three. It's a night she'll never forget that she can't even remember.

Featuring gorgeous full-color illustrations by illustrator Mike Odum that accompany the text, this heartwarming cautionary tale informs readers of the dangers of mixing alcohol and small mammals.
Sam Miserendino is an attorney by day, author by night, and father 24/7. It was in this latter role that Sam was inspired to write about beer-drinking bunnies and bong-smoking bears. After reading books about carb-addicted moose, mice, and pigs to his son and daughter for the millionth time, Sam's thoughts drifted to other animals with other addictions. Sam lives in Buffalo, New York, with his wife, two children, two dogs, and two cats, none of whom, he is happy to report, are addicted to anything more serious than chew toys, catnip, and television.

Mike Odum is a former bartender so he has extensive experience with inebriated mammals. Mike's observation of bar fauna informed his skillful renderings in If You Give A Bunny A Beer and If You Give A Bear A Bong. When not drawing drunk bunnies and stoned bears, Mike develops games for ROOT 76—a game company he co-founded. Mike lives in Richmond, Virginia, with his wife and two-year-old daughter, who enjoys sneaking into his studio and adding her own touches to his work.