How to Disappear and Never Be Found: The Ultimate Guide to Privacy, Security, and Freedom (Paperback) 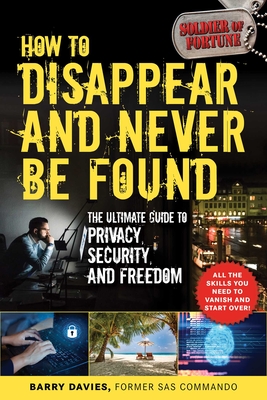 How to Disappear and Never Be Found: The Ultimate Guide to Privacy, Security, and Freedom (Paperback)


Not On Our Shelves—Ships in 1-5 Days
Whether you’re just concerned about privacy and data security, or being followed or stalked and need to get away as soon as possible, being able to disappear without a trace is something that you will need to know someday—and with How to Disappear and Never Be Found, you'll be able to do just that.

Barry Davies and Soldier of Fortune magazine have produced a solution to all of these problems and more with How to Disappear and Never Be Found. No matter the reason, Davies divulges the secret ways to disappear that only a military-trained soldier could know. Formerly serving in the British Special Air Service, Davies was trained in this secret art and will inform you of the many companies to call in order to erase all records, how to give false information, how to disappear in our social media environment, and much more.

In How to Disappear and Never Be Found, readers can learn how to protect themselves, their friends, and their families, all with the secret ways to disappear that Davies reveals. Whether you’re an ordinary civilian or a military operative, having this skill is imperative to ultimate survival . . . and there’s nobody better at knowing how to vanish at a moment’s notice than a former SAS expert. By following this model, one never has to feel unsafe or afraid ever again.
Barry Davies, BEM spent eighteen years in the British Special Air Service serving around the globe. He participated in the storming of the hijacked Lufthansa plane at Mogadishu in 1977 and was awarded the British Empire Medal. He is the author of The Complete SAS Survival Manual and The SAS Self-Defense Handbook. Davies lives in England.