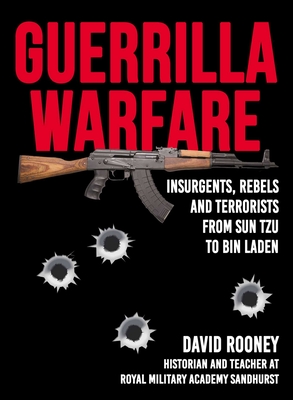 
Not On Our Shelves—Ships in 1-5 Days
The history of the world's most brutal surprise attacks: guerrilla warfare.

Since man's earliest days, there has been conflict and, also from that point, unconventional forms of action where the norm was abandoned and the unorthodox employed. Here, historian David Rooney selects examples of the leaders who, for personal, religious, tribal, or national ambitions, have been trailblazers in this form of warfare.

Tracing the origins of guerrilla theories back to the Maccabees, the author moves on through the Napoleonic Age and the Boer Wars before considering Michael Collins, Mao Tse Tung, T. E. Lawrence, Castro and Guevara, and the Guerrillas of World War II before considering the situation with Al Qaeda and Osama Bin Laden. The irregularity of this form of military action seems so pertinent in an age where convention and tradition in all walks of life is quickly abandoned in search of fast results; the warrior of the twenty-first century is more likely to adopt unconventional strategies than ever before. The topic is one of public debate and this explanation of its evolution can only increase our understanding and awareness of the topic.
David Rooney is a historian and has taught in many important institutions, including the Royal Military Academy Sandhurst. Amongst his previously published titles are Wingate and the Chindits, Burma Victory, and Military Mavericks. He lives in Cambridge, United Kingdom.