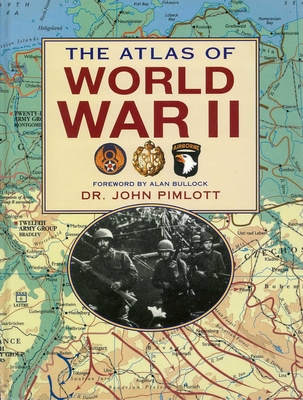 
On Our Shelves Now at:
The Atlas of World War II traces the course of the conflict chronologically by showing each major campaign as a full-color map, further illustrated by archive action pictures. Skillfully bringing to life the human experience of war with eyewitness accounts of the struggle, this book presents the political and strategic conditions that led to the war, offering a unique insight into military operations and tactics. World War II remains a topic of fascination and study, and this book is an ideal addition to the shelves of all interested readers.
Dr. John Pimlott was head of the Department of War Studies at the Royal Military Academy, Sandhurst, England. A foremost expert on twentieth-century warfare, especially World War II, his works include studies of particular campaigns. He has also edited many large-scale military histories.

Alan Bullock was a British historian, most known for authoring Hitler: A Study in Tyranny, which is considered to be the first comprehensive biography of Adolf Hitler. He passed away in 2004.