The Science of Stephen King: The Truth Behind Pennywise, Jack Torrance, Carrie, Cujo, and More Iconic Characters from the Master of Horror (Paperback) 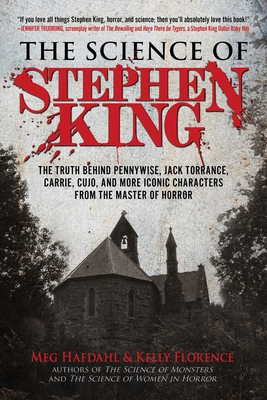 The Science of Stephen King: The Truth Behind Pennywise, Jack Torrance, Carrie, Cujo, and More Iconic Characters from the Master of Horror (Paperback)


Not On Our Shelves—Ships in 1-5 Days
Uncover the theories behind the Master of Horror's macabre tales: It, The Shining, Carrie, Cujo, Misery, Pet Semetary, and so much more!

Gothic media moguls Meg Hafdahl and Kelly Florence, authors of The Science of Monsters and The Science of Women in Horror, and co-hosts of the Horror Rewind podcast called “the best horror film podcast out there” by Film Daddy, present a guide to the Stephen King stories and characters we all know and love. Through interviews, literary and film analysis, and bone-chilling discoveries, The Science of Stephen King delves into the uniquely horrific Stephen King universe to uncover the science behind the legendary novels that have become an integral part of modern pop culture, answering such questions as:  Join Kelly and Meg as they learn if we all really do float down here!
Meg Hafdahl is an author and co-host of the Horror Rewind podcast. Her female-driven horror stories have been produced for audio by The Wicked Library and in anthologies such as Eve’s Requiem: Tales of Women, Mystery and Horror. Meg lives in Minnesota with her husband, two young sons, and a menagerie of pets.

Kelly Florence is a teacher, a mother, and a horror film lover. She is passionate about female representation in all media and particularly in the horror genre. Kelly produces and co-hosts Horror Rewind. She also owns Gothic Gifts, a shop for fans of horror.
“If you love all things Stephen King, horror, and science, then you’ll absolutely love this book! Authors Meg Hafdahl and Kelly Florence intricately discuss and decipher the science behind some of Stephen King’s most legendary stories, creations, and monsters. This in-depth exploration into all things King and science is a must-read!” —Jennifer Trudrung, screenplay writer of The Bewailing and Here There be Tygers, a Stephen King Dollar Baby film