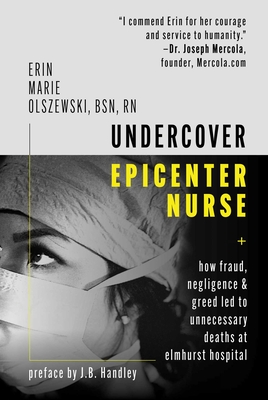 By Erin Marie Olszewski, J. B. Handley (Preface by)


Not On Our Shelves—Ships in 1-5 Days
Undercover Epicenter Nurse blows the lid off the COVID-19 pandemic.

What would you do if you discovered that the media and the government were lying to us all? And that hundreds, maybe thousands of people were dying because of it?

Army combat veteran and registered nurse Erin Olszewski’s most deeply held values were put to the test when she arrived as a travel nurse at Elmhurst Hospital in the epicenter of the COVID-19 pandemic. After serving in Iraq, she was back on the front lines—and this time, she found, the situation was even worse.

Rooms were filthy, nurses were lax with sanitation measures, and hospital-acquired cases of COVID-19 were spreading like wildfire.

Worse, people who had tested negative multiple times for COVID-19 were being labeled as COVID-confirmed and put on COVID-only floors. Put on ventilators and drugged up with sedatives, these patients quickly deteriorated—even though they did not have coronavirus when they checked in.

Doctors-in-training were refusing to perform CPR—and banning nurses from doing it—on dying patients whose families had not consented to “Do Not Resuscitate” orders.

Erin wasn’t about to stand by and let her patients keep dying on her watch, but she knew that if she told the truth, people wouldn’t believe her. It was just too shocking. Willing to go to battle for her patients, Erin made the decision to go deep undercover, recording conversations with other nurses, videos of malpractice, and more. She began to share what she found on social media. Unsurprisingly, she was fired for it.

Now, Erin is standing up to tell the whole horrifying story of what happened inside Elmhurst Hospital to demand justice for those who fell victim to the hospital’s greed. Not only must the staff be held accountable for their unethical actions; but also, this kind of corruption must be destroyed so that future Americans are not put at risks. The deaths have to end, and Erin won’t rest until the bad actors are exposed.

Undercover Epicenter Nurse: How Fraud, Negligence, and Greed Led to Unnecessary Deaths at Elmhurst Hospital is a shocking and infuriating inside exposé of the American healthcare system gone wrong. At the same time, it’s the story of a woman who traveled from the small-town streets of Wisconsin, to the battlefields of Iraq, to the mean streets of Queens, on a quest to help fight for her country. With this book, the real battle has begun.
Erin Marie Olszewski, BSN, RN,  has spent her life fighting for the freedom of everyday Americans. As a young woman, she joined the US Army to fight overseas in Operation Iraqi Freedom. Returning home, she turned her focus, drive, and dedication to defending our most deeply held values on American soil. Erin has spent years fighting for medical freedom. As a registered nurse and a mom of a vaccine-injured child, she has seen firsthand the effects of forced treatment on infants, young children, and adults. In 2020, Erin volunteered for the front lines yet again as a traveling nurse assigned to New York's Elmhurst hospital during the COVID-19 pandemic. What she found there horrified her and inspired a new focus to her advocacy. Erin's forthcoming book, The Undercover Epicenter Nurse, will reveal how gross negligence, insurance fraud, medical malpractice, and good old-fashioned greed are killing everyday Americans at Elmhurst and beyond. Her new fight is a fight for a return to ethics, transparency, and respect for the truth—values sorely needed in the medical field today, and in our country at large. Everyday Americans are needed in that battle as well. Join her.

J.B. Handley is the author of How to End the Autism Epidemic and is the co-founder and chairman of Generation Rescue. He is also the co-producer of the documentary film Autism Yesterday and the co-founder of the Age of Autism blog.

"I think this is a scandal. I don't use that word lightly. You were sent home for complaining about a policy of putting COVID patients with people who weren't infected. That's shocking!"
—Tucker Carlson, author and political commentator

Erin Marie is a brave patriot who not only risked her health, but also risked losing her nursing license by going undercover at the epicenter of the COVID-19 pandemic at Elmhurst Hospital in NY and exposing the reprehensible care being rendered there. I commend her for her courage and service to humanity.
—Dr. Joseph Mercola, founder, Mercola.com

“I recommend this book to anyone who wants to know the truth about what happened in the NYC hospitals during the COVID-19 crisis. This is an important step toward ensuring that Patients’ Rights are protected, and I thank Erin for going the extra mile to hold the line for Patients’ Rights. All patients have inalienable rights to have food, water, and family at the bedside. They have a right to receive Standard of Care treatment from qualified medical professionals with full and voluntary informed consent.”
—Nicole Sirotek, BSN

“Elmhurst practices medicine by guidelines unheard of in a first-world country—and justified it, due to their classification as a city hospital. Modern-day policies and best-practice standards are non-existent. As crisis nurses, we did what we are trained to do; don our gear and get to work. Serving the people of Elmhurst wasn’t about combating COVID-19. It was about combating a culture of neglect and malpractice.”
—Katherine Alexa, RN, Elmhurst

“Self-sacrifice is not a new concept for this courageous combat veteran. She put it all on the line for her country while abroad, and now, her mission is here at home. She has broken a deafening silence in an effort to expose the corrupt intermingling of big health care, big pharma, and big government, which has infiltrated the system right down to the bedside in the epicenter of the pandemic. If we truly desire to heal, we must first be willing to acknowledge the corruption that exists within the industry and allow the shocking and uncomfortable truth to be a catalyst for change.
—S. Adams, MSN, NP-C