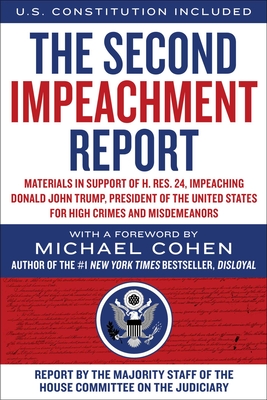 By Majority Staff of the House Committee on the Judiciary, Michael Cohen (Foreword by)


Special Order—Subject to Availability
With a foreword by New York Times bestselling author and former confidante of Donald J. Trump, Michael Cohen, the official report of materials supporting the first-ever second impeachment of a President of the United States—complete with US Constitution included.

In 2019, Donald Trump became only the third US President to be impeached by the House of Representatives on charges of abuse of power and obstruction of congress. In January 2021, he became the first President in American history to be impeached for a second time. Though no sitting president was ever convicted, will Trump be the first there, too?

Still in the midst of the coronavirus pandemic, which the president has also been accused of handling poorly, and an ongoing refusal to concede his loss to rival candidate Joe Biden, Donald Trump is said to have provoked his followers to storm the US Capitol in Washington, DC, resulting in a shocking protest-turned-violent in an effort to stop the official Electoral count in certifying Biden's victory. The unprecedented event led to the deaths of at least five people, as well as the President being banned from all major social media, including Twitter, Facebook, Instagram, and more, due to risk of inciting more violence.

This groundbreaking report—released by the House Judiciary Committee, chaired by Jerrold Nadler—covers Trump's conduct leading up to January 6, 2021, the attack on the capitol, his response to the insurrection, and provides a compelling argument as to why there is an immediate need to consider impeachment despite Trump having only seven days left in office.
The U.S. House Committee on the Judiciary, also called the House Judiciary Committee, is a standing committee of the United States House of Representatives, currently chaired by Jerrold Nadler. It is charged with overseeing the administration of justice within the federal courts, administrative agencies and Federal law enforcement entities.

Michael Cohen is an American attorney and businessman, and the New York Times bestselling author of Disloyal: A Memoir. He acted as Special Counsel to President Donald J. Trump from 2017-2018 and as Executive VP for the Trump Organization before then. Cohen lives in New York City with his wife and two children.