A Visit to Moscow (Hardcover) 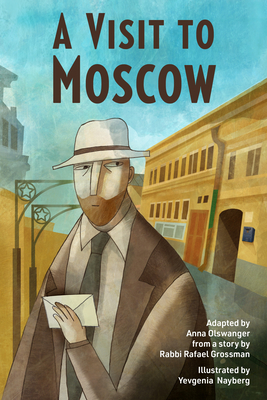 A Visit to Moscow (Hardcover)

Powerful and moving, A Visit to Moscow is inspired by the true experience of an American rabbi who travels to the Soviet Union in the 1960s, a dangerous time of uncertainty and fear for Jews in the nation.

One of Jewish Insider's Ten Books to Read in May

Yevgenia Nayberg has been longlisted for the 2022 Brightness Illustration Awards

"With starkly dramatic text and haunting images, author and illustrator convey the devastating oppression of Soviet Jewish life, and the commitment of one Jew to bring their horrifying reality into the light ...] Whether readers are familiar with the harrowing subject matter or learning about it for the first time, Rabbi Grossman's story will immerse them in a harsh world and in the persistent truth-telling needed to bring about change. A Visit to Moscow is highly recommended."
--Jewish Book Council

"Finally, it's worth mentioning a soon-to-be-released graphic narrative called A Visit to Moscow. Adapted by Anna Olswanger from an account by Rabbi Rafael Grossman (1933-2018), the book was inspired by Grossman's actual 1965 journey to the Soviet Union to investigate the persecution of Soviet Jews. That A Visit to Moscow is beautifully illustrated by Yevgenia Nayberg, who was born in Ukraine and now lives in New Jersey, makes this encounter with the history of the Soviet Jewry movement, which was so much a part of the later 20th-century American Jewish experience, especially poignant and timely."
--Moment Magazine

"Inspired by real events, the eye-opening and important narrative in this graphic novel are punctuated by the phenomenal illustrations, showing Jewish life in the Soviet Union. Set in 1965, readers will see the power of antisemitism and the incredible courage it takes to live a life of faith under oppression. It shows that, despite living with tyranny and unimaginable sacrifices, one can hold on to their soul and that there is beauty to be found. It's my hope readers will see how critical it is for us to advocate for others and do whatever we can to make a positive difference in this world."
--Wisonsin Jewish Chronicle

"Yevgenia Nayberg's art is evocative and claustrophobic and lives in that liminal space between simple children's book illustration and profound abstract comics work. Her choices in coloring are particularly well-matched to the emotional tone of the narrative. This is ultimately a story of hope--how the actions of one person can reverberate through generations to come--and as story, this is appropriate and uplifting."
--SOLRAD

In 1965, an American rabbi travels to the Soviet Union to investigate reports of persecution of the Jewish community. Moscow welcomes him as a guest--but provides a strict schedule he and the rest of his group must follow.

One afternoon, the rabbi slips away. With an address in hand and almost no knowledge of the Russian language, he embarks on a secret journey that will change his life forever.

Inspired by the true experience of Rabbi Rafael Grossman, A Visit to Moscow captures the formidable perseverance and strength of the Jewish people during the "Let My People Go" movement, a modern exodus that is often overlooked.