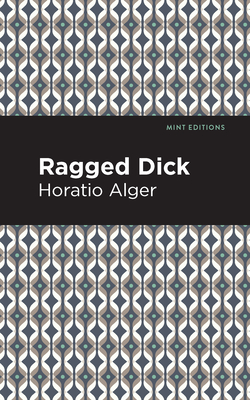 Ragged Dick (1868) is the first in a series of six novels by American author Horatio Alger. In each, Alger uses the Protestant work ethic as a template to not only examine the harsh realities of urban poverty, but provide a hopeful, concrete moral for his young readers.

Dick is a teenage bootblack who lives and works on the streets of New York City. Despite his difficult circumstances, he never loses hope. Dick is determined to both survive and make it in life, and prides himself on his moral standards, refusing to lie, cheat, or steal to get ahead. When he is recognized for his honesty by local church figures and businessmen, they provide him opportunities to work. With the money he manages to save, Dick opens a bank account and begins to rent a modest apartment in the city. As he moves closer and closer to middle class life, Dick takes every chance he is offered and, most importantly, remains hopeful that his hard work and moral vision will not only pay off, but keep him grounded, respected, and alive. Horatio Alger's Ragged Dick is a simple Bildungsroman with a valuable message that remains a classic work of young adult fiction to this day.

Although Alger's work was intended for young boys of an entirely different era, many of his themes ring true for our own. In a time of economic crisis and instability, hopeful stories of perseverance and hard work could be a welcome form of entertainment and education. Additionally, Alger's novel provides a window onto America's past, toward the very origin of the middle-class promise sought and attained by millions. The Protestant work ethic and the American Dream have been the nation's defining myths for well over a century, and while there is ample room to criticize their motives and attainability, it is undeniable that they have shaped America's history and people into what they are today.

With a beautifully designed cover and professionally typeset manuscript, this edition of Horatio Alger's Ragged Dick is a classic of young adult fiction and American literature reimagined for modern readers.