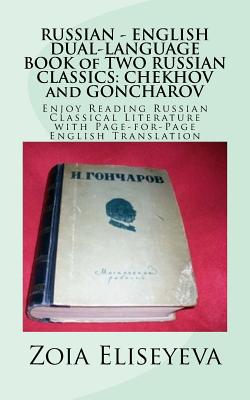 
Not On Our Shelves—Ships in 1-5 Days
(This book cannot be returned.)
It is a short, convenient to read compilation of the text extracts of the two of the Russian greatest classical writers of the second half of the 19th century: Anton Pavlovich Chekhov and Ivan Alexandrovich Goncharov. The reader can listen to the both parts of the book, in the Russian language, on the author's UTube Channel 'zoiacalifornia", read by the author, who is a native speaker of Russian. In this (the 1st) volume there is Chekhov's short story "Stout and Thin" with the author's (Zoia Eliseyeva's) translation into English, and also, an extract - the very beginning - of Goncharov's masterpiece, the novel "Oblomov", with the translation made in the 1950-ties in England by a professional literary translator. The book is a dual language book. When a reader opens the two pages, they will see on the left page side Russian original text, and on the right page side its English translation. The author, a trilingual educator, who lives and works in California, USA, when formatting the book, was trying to match the Russian to their English matching paragraphs, as best as she could. Also, the pages of Russian and English are kept strictly in match so the translation text would never overrun to the next page where a new paragraph/page starts. The book is an excellent tool for those who studies RUSSIAN, and for ENGLISH readers who are interested in having a closer look at the Russian original of the two uniquely talented and profound classical writers. The book is supplied by author's comments and some Russian language/culture explanations.
Zoia Eliseyeva (other last names, by marriages, Burkhart/Sproesser) is a native Russian, born in Soviet Union. She got a Bachelor's degree in English and Literature from Latvia State University in 1989, a Master's degree in Education from California State University in San Bernardino in 2002. Zoia is an author of an autobiographical-immigrant book, the chapters of which first were published in Russia and in USA back in 1996. Since then Zoia has studied Spanish and published over 17 books (English-Russian-Spanish-French) on Amazon-Kindle, as well as she created two educational UTube Channels "zoiacalifornia" and "Tutoring Languages Services ESL, Russian, Spanish". Zoia has been providing professional language services in California, USA, as a teacher of languages, and a translator. Her profile can be found on all public sites. Being an optimist who walks through life with a smile, Zoia has been appreciated by her students of Russian, English, and Spanish languages in Riga, Latvia, in California, USA, and in Oaxaca, Mexico.